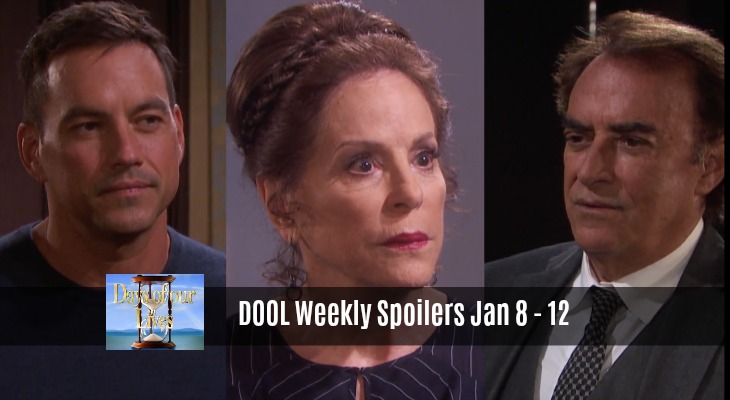 “Days of Our Lives” spoilers for the week of January 8-12 tease that Andre (Thaao Penghlis) will continue to play a dangerous game. DOOL recently revealed that Andre and Vivian (Louise Sorel) are in cahoots, so this sounds like a recipe for disaster. Kate (Lauren Koslow), Chad (Billy Flynn) and Abigail (Marci Miller) are all in the dark on Andre’s devious plan.

Andre has been a pretty harmless character over the past few months. He’s done a great job of hiding his sneakiness from his family. Of course, Andre’s actions are bound to catch up with him eventually. This can’t end well for Andre or his sneaky partner in crime. Vivian’s a wild card, so it’s not a good idea to trust her anyway. You never know what else she might be cooking up.

Vivian and Andre are the key players here, but it seems Stefan’s (Tyler Christopher) in agreement. “Days of Our Lives” spoilers reveal that Andre’s craving power. The board has been using his past against him, so he hasn’t had a lot of opportunities for advancement. Vivian intends to help Andre do something about that. She’s promised that he’ll finally have some clout at DiMera Enterprises.

Andre’s tired of Chad (Billy Flynn) being viewed as the most influential DiMera. As the oldest brother, Andre feels like he deserves a spot at or at least near the top. However, all this would be news to the others. Nobody in the DiMera clan has an inkling that Andre’s so power hungry.

We should also mention Andre’s growing feelings for Kate. As his plan moves forward, Andre may be torn between his head and his heart. He’ll certainly have some close calls here and there. “Days of Our Lives” spoilers hint that Kate will almost catch on this week. She’ll find Andre and Vivian as they wrap up a top-secret meeting.

Andre will hide the truth for now, but it’s only a matter of time until Kate makes a shocking discovery. “Days” spoilers indicate that there’ll be some double-crossing concerns, too. Stefan, Vivian, and Andre have distinct agendas. They could get in one another’s way as this storyline heats up.

DOOL viewers won’t want to miss all the action. We’ll give you updates as other “Days” details and rumors emerge. Stay tuned to the NBC soap and don’t forget to check Soap Opera Spy often for the latest “Days of Our Lives” spoilers, rumors, updates, and news.

The Young and the Restless (YR) Spoilers: Graham’s Power of Attorney Threat is Real – Abbott’s Must Take Dina Out of State