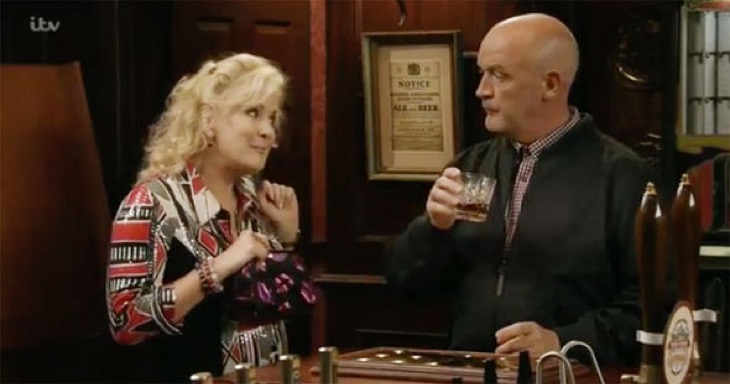 Coronation Street spoilers indicate that Liz McDonald (Beverley Callard) might be Pat Phelan’s (Connor McIntyre) next victim. As a matter of fact, Liz might be finding herself in dangerous territory as she tells her friend Eileen that her husband might not be the man that she thinks he is.

It all begins when Liz suggests that she and Eileen (Sue Cleaver) take a getaway to Barcelona together for a weekend. Of course, Pat isn’t a fan of the idea, which makes Liz believe that he’s trying to control his wife. The next day Liz invites Eileen for lunch to apologize for her little bust-up with her husband. Unfortunately, she has more than a few drinks and starts telling Eileen exactly what she thinks of deranged builder Pat Phelan.

Meanwhile, Pat has other problems that he’s dealing with right now. He finds his former protégé Seb Franklin (Harry Visinoni) at his daughter Nicola Rubenstein’s (Nicola Thorp) apartment. Seb warns both Nicola and Gary Windass (Mikey North) that Pat is on to them.

Things go from bad to worse when Nicola ends up at the hospital with stomach pains. That’s when Gary tells Pat that he knows he’s been up to no good and even calls the builder a killer right in his face.

Now that Pat is on the edge, there’s a strong possibility that he might take his anger out on someone. Time will only tell if he will do it to Gary or if he’ll take it out on Liz. Fans will just have to tune in to see what will happen next!

Coronation Street airs weeknights on the ITV network in Britain and is available on Britbox in the United States. Sound off with your thoughts in our comments section below. Also, don’t forget to check back with Soap Opera Spy for all the latest news, updates and spoilers on Coronation Street and all of your favorite British and primetime soaps right here!