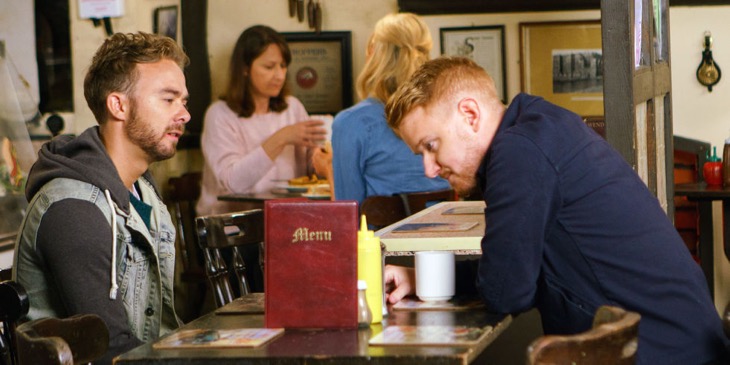 Coronation Street spoilers indicate that David Platt (Jack P. Shepherd) is going to get into some serious trouble in the coming weeks. Apparently, he will find himself for assault after beating up Gary Windass. (Mikey North) David will also have a hard time coping with the fact that he was violated by another male.

Spoilers tease that David will be sexually assaulted after a night out. But that’s not his only problem. He’s also having a hard time forgiving Gary Windass for cheating on Sarah with Nicola Rubenstein. (Nicola Thorp) After one too many drinks, David goes after Gary only to find himself bloodied up and in handcuffs. Right before he attacks Gary, he blames him for cheating on his sister.

One source close to production tells Britain’s The Sun paper, “The scenes are set to be explosive. Fans will have seen it’s been slowly boiling under for some time now and it will come to a dramatic head. David made the threat to Gary a few months ago so he’s definitely got the potential to do damage.”

As many viewers already know, Gary returned to Weatherfield, much to Sarah’s surprise. He was presumed dead after being near an explosion in the Ukraine. Unfortunately, Gary’s reunion with Sarah is short-lived, especially after she finds out that he cheated on her with Nicola. Sarah (Tina O’Brien) and Gary have since reunited.

David tells him, “Right, well I’ll be keeping my eye on you from now on. Because if you hurt my sister Gary, I’ll hurt you.”

But that’s not the only problem that David will have to deal with. Viewers will also see him drugged up and assaulted by newcomer Josh Tucker (Ryan Clayton) after a boozy night out.

Coronation Street airs weeknights on the ITV network and is available on Britbox in the United States. Drop us a line with your thoughts in our comments section below. Also, don’t forget to check back with Soap Opera Spy for all the latest news, updates and spoilers on Coronation Street and all of your favorite British soaps right here!