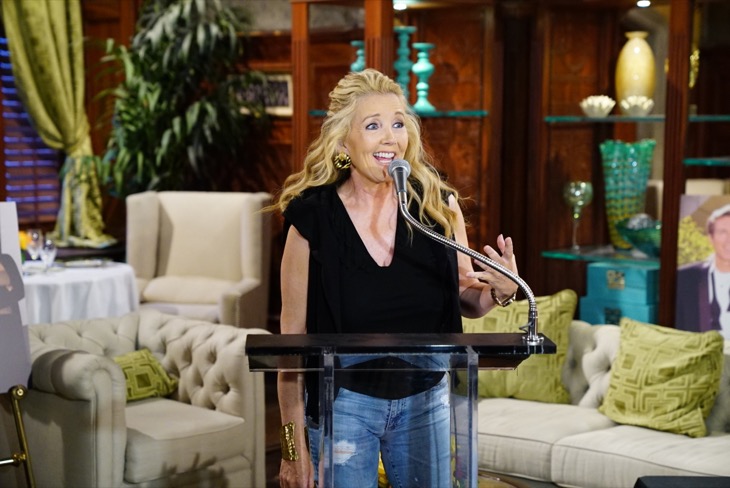 Nikki (Melody Thomas Scott) put Victor’s (Eric Braeden) money to good use on ‘The Young and the Restless’. When asked by the ‘Moustache’, Nikki told her on-again husband that she couldn’t return the loot she stole from him because it was used. She revealed herself as the formerly anonymous bidder who beat out Victor to buy Chancellor Park.

Y&R has honored Cooper in many ways since her passing. Ongoing references to Katherine, the magnificent portrait of the Grande Dame that hangs above the Chancellor mansion mantle, which is still used as a main set, the prior naming of Chancellor Park and it’s frequent use as a scene-setting represent elements of script respect.

It seemed odd that the writing staff was tasked with reducing Katherine’s presence. That’s why it’s fitting that Nikki blocked Victor from carving up the park that bears her mentor’s name.

This reveal sets up a potential battle with Victor, who insisted that his wife return to the Ranch. More than a request, he let Nikki know the terms they would abide by in order for her to avoid jail time for having embezzled from his private account. It would seem plausible to believe that he would also ask her to surrender at least some of the park’s property for the business development he had in mind.

And then there’s the just-returned Jill (Jess Walton). She had a sort-of sibling rivalry with Nikki while Katherine was alive. Though they aren’t sisters, Jill felt the “old bat” always favored Nikki and she was right.

The love Nikki offered to Katherine still exists. That’s why she used part of Victor’s fortune to purchase the ground that rightly honors the lady who arguably was and likely will always be GC’s greatest citizen.

The Bold and the Beautiful (B&B) POLL: Do You Like The New Thorne Forrester?