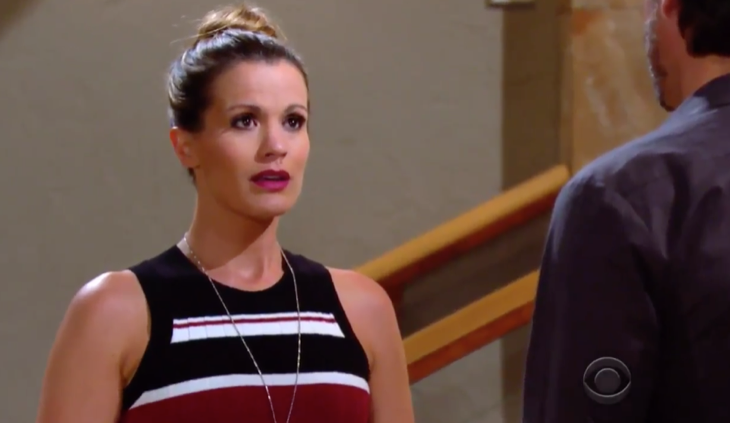 “The Young and the Restless” spoilers for Wednesday, August 23, tease that Chelsea (Melissa Claire Egan) and Nick (Joshua Morrow) will face some issues. Now that they’ve been unpacking Nick’s belongings, this is becoming very real for Chelsea. She can’t help but feel overwhelmed by all the changes.

Chelsea loves Nick and thinks it’ll be nice to wake up with him each day. However, it could be tough to lose a little of her independence. “The Young and the Restless” spoilers say Nick’s news will add to their problems. He’ll tell Chelsea that Faith (Alyvia Alyn Lind) is coming home from camp tomorrow.

Chelsea will ask if Faith is going to stay with them first. She’ll seem nervous about Faith’s reaction to the sudden shifts in her life. Nick will suggest that he was planning on taking Faith before Sharon (Sharon Case), but he’ll want to make sure Chelsea’s on board.

Y&R viewers know that Faith can be beyond adorable or a total nightmare. It really depends on her mood. Unfortunately, she’ll lean toward the latter this time. Faith will indeed cause trouble as soon as she’s back in Genoa City.

Hilary’s Jealous and Jordan Has Had Enough

Meanwhile, Jordan (Darnell Kirkwood) and Hilary (Mishael Morgan) will get into an argument. It appears Hilary’s jealousy will cause strife again. Jordan is getting tired of Hilary’s envy and the drama it always creates.

Of course, Jordan’s feelings for Lily (Christel Khalil) aren’t helping the situation. It’s clear that Hilary has a good reason to be jealous, but it won’t matter in the end. “The Young and the Restless” spoilers say Jordan will declare that this isn’t working. He’ll contend that they should just move on.

Hilary won’t be happy when Jordan announces he wants to part ways. She’ll undoubtedly assume that Lily is to blame. It sounds like Hilary could be on a mission for vengeance before long. At the ranch, Nikki (Melody Thomas Scott) will have a fierce goal as well. She’ll intend on giving Victor (Eric Braeden) a piece of her mind.

Victor and Nikki Have Some Tense Moments

Victor will be surprised when Nikki shows up to rant. Y&R fans can expect some tense moments as they spar over how Vic’s treating Nick. The Newman family’s conflict is out of control! We’ll give you updates as other details and rumors emerge. Stay tuned to the CBS soap and don’t forget to check Soap Opera Spy often for the latest “Young and the Restless” spoilers, rumors, updates and news.