‘The Young and The Restless’ Spoilers: Tristan Rogers Back On Y&R – Is Colin Back To Cause Trouble? 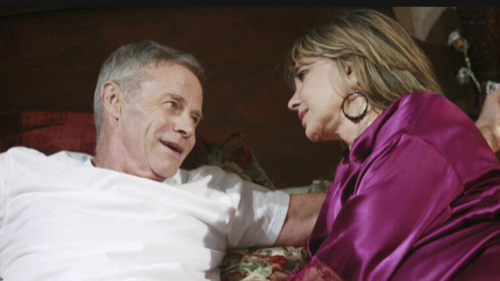 Put another shrimp on the barbie, “The Young and the Restless,” fans, everyone’s favorite Aussie dad is back! That’s right mates, Tristan Rogers is set to reprise the role of Colin Atkinson starting January 31.

There’s no official word yet as to how long the actor will remain in town, and Rogers wasn’t giving out any clues. When a fan asked him how long the upcoming appearance would last, he replied, “You never can tell.” In other words, his lips are sealed!

Colin first arrived on scene in 2010, after being sprung from an Australian prison. Once in Genoa City crooked con man eventually hooked up with his son, Cane (Daniel Goddard).

When Colin married Cane’s rich and privileged adoptive mother Jill, no one was sure the union between the con man and the diva would last, or that it was a true love match.

The two marrieds have had their share of ups and downs through the years, but they seem always seem to wind up back in each other’s arms.

So Y&R fans, what do you think brings the loveable rascal back to Genoa City? Jill has her hands full juggling business at Jabot while interfering in her son Billy’s (Billy Thompson) love life. Is Colin back to lend moral support?

Or could he be involved with fellow schemer Gloria (Judith Chapman) who’s trying to get her hands on Fenmore’s?

Then again, Cane just had surgery, so maybe they’re going to spend some quality time together. His wife Lily (Christel Khalil) is busy tending to her recuperating brother Devon (Bryton James), so maybe Colin will help her with nursing duties?

Wait a minute, the last time we saw Colin he was trying to blackmail Devon, so that’s probably not it! What do you think Y&R fans, what brings Colin back to the canvas, and how long will he stick around?

‘The Bold and the Beautiful’ Spoilers: Quinn Goes to Bat For Ridge- Will It Work?