The Young and the Restless POLL: Who Is the Better Man Now – Victor or Nick? VOTE! 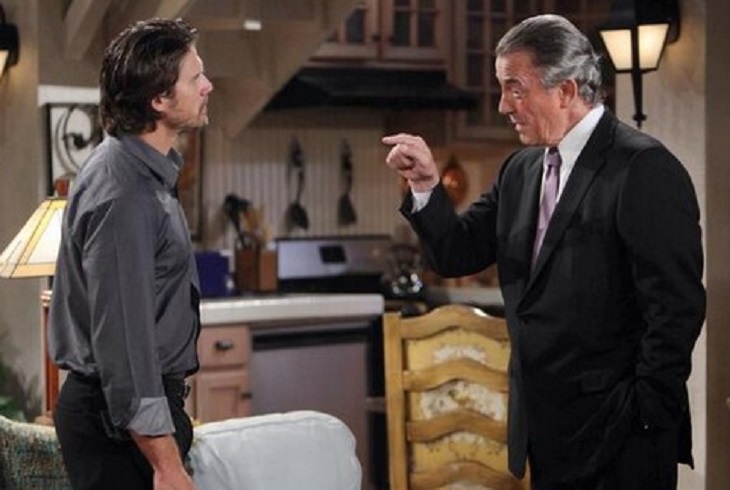 Nick (Joshua Morrow) has no use for Victor (Eric Braeden) on ‘The Young and the Restless’. The feeling is mutually shared at the moment. If forced to get off the ‘neither’ fence, who do viewers think is the better man?

Both Newman men have wronged various people throughout their lives. Clearly Victor runs miles ahead of his first-born son in this category and likely always will. But specifically regarding their actions toward each other where currently storylines are considered, this call may be a close one to make.

Victor continues to withhold information from Nick about Christian’s (Jude and Ozzy McGuigen) paternity. Those who hate the ‘Moustache’ see that as wrong. Victor’s fans believe that he’s been compassionate, as this boy is a link to Nick’s departed wife Sage (Kelly Sullivan).

Nick became enraged when he learned that his father was involved with Chloe (Elizabeth Hendrickson). She was finally forced into admitting that Adam’s (Justin Hartley) apparent death came at her hands. Confirming that Victor was the reason why she initially returned to town and that he then helped her escape in order to protect himself proved too much for Nick to take.

Nick fans surely believe that he spoke truth to power and that he told Nikki (Melody Thomas Scott) and Vickie (Amelia Heinle) what Victor had been secretly up to in order to help them protect themselves. Nick’s detractors see him as having betrayed his father. Yes, Victor’s actions were inexcusable. But claiming outrage over Adam’s death doesn’t fit with nearly all of Nick’s interactions with Adam while he was alive.

Then there was the recent charity concert. Victor organized a grand gesture by orchestrating the event. He wanted Nikki to prove to herself and to the world that she could face Multiple Sclerosis, while also benefiting the cause.

Nick didn’t know that Victor was in the dark about his mom’s MS flare-up and then sabotaged the sound board that was going to be used that night. Father confronted son, they argued and Victor punched Nick with a right cross. That followed Nick having boxed his dad’s face weeks earlier at the ranch.

There are plenty of historical points that could be referenced. And additional details about current times could be added as well. Those takes are welcome along with reader’s answers to the question.

Fans of ‘The Young and the Restless’ rightfully express their opinions on a regular basis. So, who is the better man, Nick or Victor? Vote in our poll below!

Soap Opera Spy is a leading source for everything linked to ‘The Young and the Restless’.  Check back with Soap Opera Spy for more Y&R spoilers right here.