The Young and the Restless POLL: Who Do You Think Graham Bloodworth Is? VOTE! 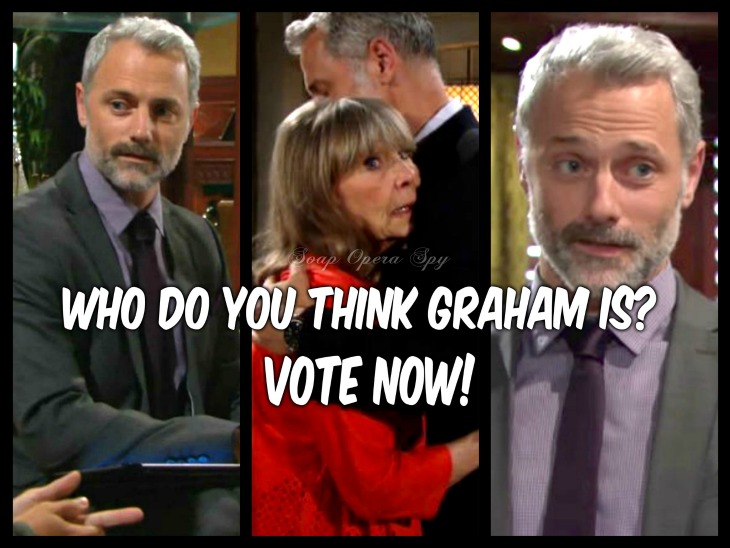 The Young and the Restless (Y&R) fans have been in an uproar about who Dina Mergeron’s (Marla Adams) companion, Graham Bloodworth (Max Shippee) really is. Initially he was believed to be the one controlling Dina over everything from her interaction with her children, Jack (Peter Bergman), Ashley (Eileen Davidson) and Traci Abbott (Beth Maitland) to everything business related; but who is Graham Bloodworth really?

Y&R’s Dina Mergeron has been in various relationships including her infamous affair with a much younger Parisian artist, Eric Garrison (Brian Matthews). For viewers to believe Graham is her younger lover, would not be far-fetched as she openly admitted to liking younger men. The Young and the Restless sources show Dina is visibly upset when she sees Graham and Ashley touch hands and brushes him off as she leaves upstairs, could history be repeating itself?

The Young and the Restless has had its share of con-artists and sources suggest, Graham may be simply that. He entered Dina’s life when she was vulnerable, revealing he came to Paris after finishing college and never left. He strongly pushes his financial and business background on everyone, could he really be trying to swindle Dina after all this time together?

The Y&R spoilers reveal Graham having a rather intimate conversation with Ashley during which he tells her about his own personal broken family and how well he understands complicated family dynamics, telling her he is in no position to judge. Words like that could imply he is indeed related to one of Dina’s scorned lovers; or is he possibly after Ashley, holding her responsible for his family trauma?

Could it be that Graham is not just Dina’s companion, but her doctor too? He has mentioned a few times how the Abbott children should be grateful for the time they have with their mother and how this could be the last time they see her. Is Dina possibly dying and she made a deal with him to make sure her children and grandchildren didn’t see her suffer?

Who do you think Graham Bloodworth really is? Please take our poll and tell us what you think. Be sure to tune into CBS’ The Young and the Restless (Y&R) to catch up on everything happening in Genoa City right now. Check Soap Opera Spy often for updates, news, rumors and spoilers!

The Bold and the Beautiful Spoilers: Rick Shares Distressing News with Maya – Nicole Fears She Made a Big Mistake – More Sheila Drama