The Young and the Restless POLL: Is Juliet Pregnant or Faking It? VOTE! 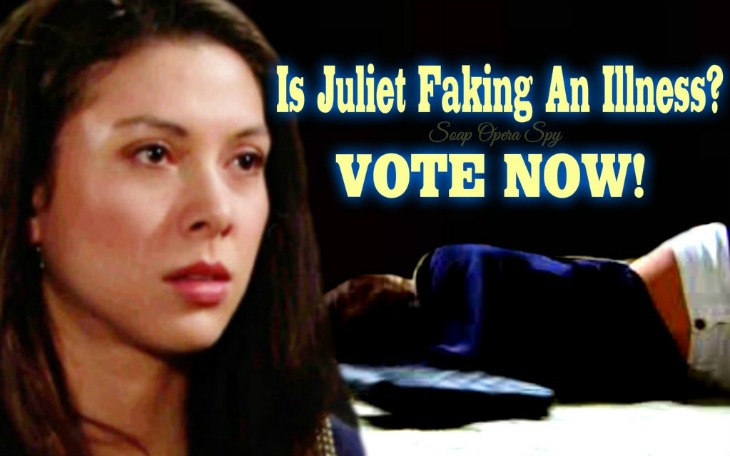 The Young and the Restless (Y&R) spoilers reveal when confronted by Lily Winters Ashby (Christel Khalil), Juliet Helton (Laur Allen) faints; the question fans are dying to know is why she fainted. What do you think happened to Juliet?

Y&R’s Lily has had enough of people messing with her family, after years of conflict with Hilary Curtis (Mishael Morgan), Lily is confronted with a new threat to her, her marriage and her children when Juliet comes forward, after being fired from Brash & Sassy, claiming Lily’s husband, Cane Ashby (Daniel Goddard) had sexually harassed her, promising her a position in the company if she only had sex with him.

Lily was in the middle of giving Juliet a piece of her mind, when Juliet literally falls to the ground. What do you think is wrong with Juliet, if anything?

If The Young and the Restless’ Juliet is speaking the truth, that her and Cane spent the night together, having sex, it is entirely possible she is pregnant with his child; maybe Juliet has no idea she is pregnant or maybe she did and that is what she was trying to tell Lily when she first came into the bar.

Is it possible that Juliet is really sick, and maybe she needs the money from this law suit for whatever treatment she needs for her ailment? Juliet seemed pretty desperate to reach out to Lily after the deposition happened. It is plausible that Juliet is attempting to befriend Lily again and play on her sympathies, as Lily is the one person who would know what it’s like to be suffering from a debilitating illness, like cancer.

Some Y&R fans feel Juliet is simply faking it to get the attention she needs. She has been following Hilary’s lead from the beginning when it came to the law suit; faking an illness is just another page out of Hilary’s play book. Juliet has proven to be a snake and it still remains to be determined why she is dragging Cane through the mud; and its clear she is up to something and probably not working alone.

Related: The Young and the Restless Spoilers: Jordan Thinks Juliet Faked a Medical Scare – Jack Has a Risky Plot – Billy Clashes with Victoria

What do you think happened to cause Juliet to faint in public? Please take this poll and let us know what you think. Be sure to tune into CBS’ The Young and the Restless (Y&R) to catch up on everything happening in Genoa City. Check Soap Opera Spy often for updates, news, rumors and spoilers!

The Young and the Restless Spoilers Friday June 30: Dina Stands Up to Jack and Ashley – Graham and Gloria Bond – Cane and Lily Face a Tough Task

The Young and the Restless News: Michael Muhney Speaks Out On Y&R Return Rumors