The Young and the Restless POLL: Has Juliet Been Scamming Cane Since Tokyo? 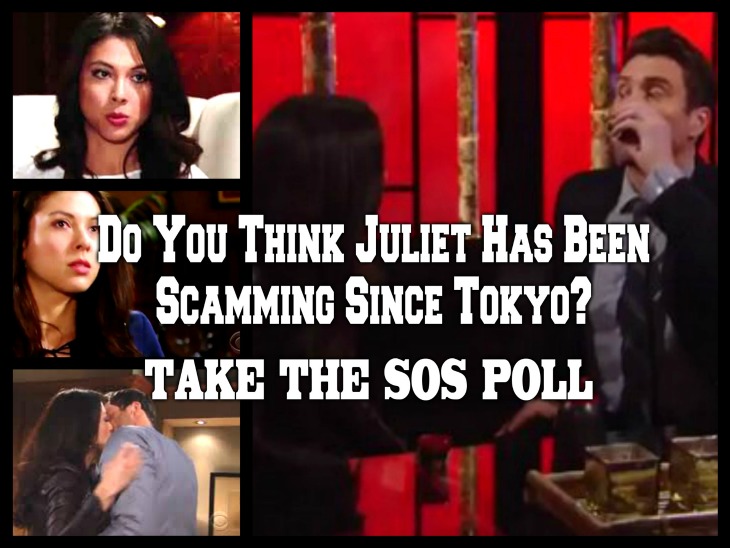 This storyline could go either way on ‘The Young and the Restless’. It can be argued that Juliet (Laur Allen) simply got mad when she was fired and allowed Hilary (Mishael Morgan) to coerce her into suing Brash and Sassy. Then again, maybe Miss Helton tagged Cane (Daniel Goddard) as an easy mark since she first began working with him in Tokyo.

Of course, blended scenarios could prove true as well, so a fact review is in order. It’s hard to withhold judgment at this point, but let’s simply look at the timeline Chelsea (Melissa Claire Egan) referenced when Jordan (Darnell Kirkwood) discussed the matter with her this week.

Juliet was hired by Vickie (Amelia Heinle) to help Cane with the Sato (Richard Narita) deal. Cane chose to drink too much sake after that agreement was saved by Juliet and had to be helped to his room.

There were no signs that Juliet was going to sue anyone until after Cane purposely blew up the DARE shoot in Los Angeles. No one other than the cad Cane paid knows about that situation, yet. Vickie then opted to fire Juliet because she hadn’t received clearance from the Professional Hockey League to use the behind the scenes footage Cane shot of Billy (Jason Thompson) and the hockey players.

Savvy Y&R fans surely thought that pregnancy was a possibility after Juliet fainted in front of Lily (Christel Khalil) and Jordan. Juliet sought Lily out at the Genoa City Athletic Club prior to falling on the floor. Later, at GC Memorial Lily was handed a paper (by Juliet) confirming Cane’s baby was on the way.

It could be that Juliet has been telling the truth all along and does believe that Cane was trying to force her into a compromising position in order to help her get a job. Michael (Christian LeBlanc) would say that Juliet might not have had all elements within this ruse planned from the jump, but that she’s taken advantage of the evolving situation through creative improvisation.

Jordan’s interest in Lily makes him the man she’s most likely to turn to if ‘Lane’ flames out. Some have suggested that he’s been in on the potential scam with Juliet. She may have been one of the women he took purposeful photos of while working odd jobs in New York. This is soap, so anything is possible.

Fans of ‘The Young and the Restless’ rightfully express their opinions on a regular basis. So, has Juliet been playing Cane all along on Y&R? Vote in our poll below!