The Young and the Restless POLL: Do You Think Phyllis and Jack Will Get Back Together? 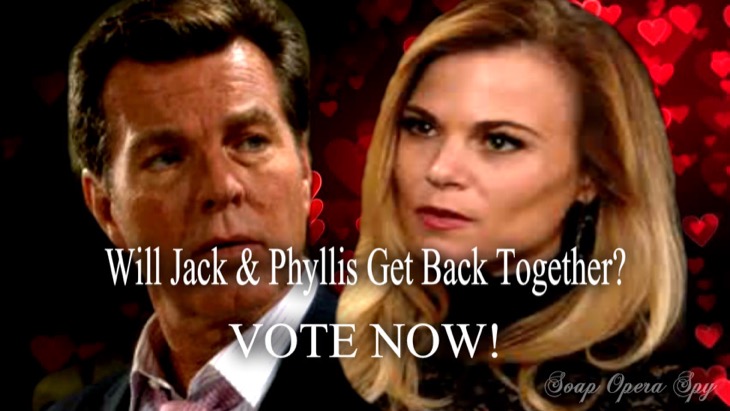 The Young and the Restless (Y&R) spoilers reveal that Phyllis Summers (Gina Tognoni) and Billy Abbott (Jason Thompson) definitely have the physical part of the relationship down pat. There is no denying that they have a deep attraction to each other, but outside of the bedroom, what do these two really have in common?

Phyllis gets envious when Billy goes to his ex-wife, Victoria Newman’s (Amelia Heinle) house to spend time with her and the children, or when they worked together at Brash & Sassy. She doesn’t trust him alone with her, not that anyone could blame Phyllis because her and Billy’s relationship started out as an affair as well. There is no trust in their relationship, not on a personal level nor on a professional level; remember Billy sneaking onto Phyllis’ computer to steal company information when she wasn’t in the room? There is no way this relationship is going to last!

Related: The Young and the Restless (YR) Spoilers: Victor’s Ruse Leads To New Year’s Love – Nikki Remains One and Only

Y&R sources tease that Phyllis and Jack have always been a sounding board for each other; even when things are rotten between each other, they still manage to figure things out. Phyllis has done the unthinkable, not only by cheating on him but also by sleeping with her own husband’s brother. Fans of the CBS soap opera know that this isn’t the first cheating scandal Jack and Phyllis would have overcome and reunited after. Remember how she cheated on him with Nick Newman (Joshua Morrow) and they didn’t know who Summer’s dad was for a long time?

Some feel that Jack and Phyllis have been cheated out of a chance at a real romance and could be a real soap opera super couple if given a chance. They have survived year long comas, building collapsing on them, paternity scandals, abductions and being replaced by doppelgangers, like Marco Annicelli. If any couple deserves a real chance at happiness, wouldn’t it be Jack Abbott and Phyllis Summers?

LOVE THE YOUNG AND THE RESTLESS? SIGN UP FOR Y&R NEWSLETTER!

The Young and the Restless spoilers want to know, after watching how close Phyllis and Jack have become lately, conspiring and working together is there a chance of them reuniting? When push came to shove, and Ashley Abbott (Eileen Davidson) called for a board meeting to push Jack out, Phyllis went against Billy and voted for Jack to stay; could this spell the end of the ill-fated couple? What do you think? Do you think Phyllis and Jack will get back together? Please vote and let us know what you think.

Be sure to tune into CBS’ The Young and the Restless (Y&R) to catch up on everything happening right now in Genoa City. Check Soap Opera Spy often for updates, news, rumors and spoilers!

The Young And The Restless News: Alyvia Alyn Lind Returns To Primetime For The Holidays