The Young and the Restless POLL: Do You Think Abby With End Up With Scott? VOTE! 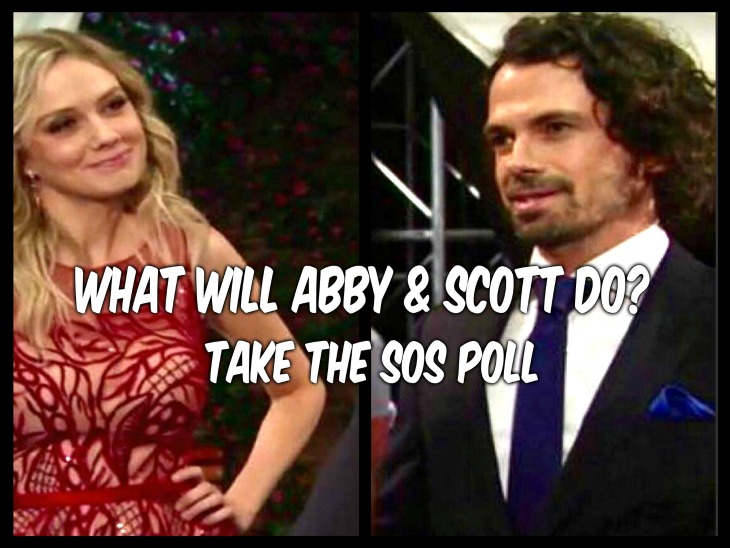 The Young and the Restless (Y&R) spoilers reveal there is definitely a connection between Abby Newman (Melissa Ordway) and Scott Grainger (Daniel Hall), as these two love to hate each other; but there is a very fine line between love and hate, is it possible these two will end up in each others arms?

Y&R’s Abby Newman has not had it easy when it comes to love and relationships. After her failed marriage to Dr. Ben Rayburn (Sean Carrigan), she threw herself into work at Newman Enterprises as interim CEO; but her father, Victor Newman (Eric Braeden) throws her for a loop when he hires journalist Scott Grainger to work with her side-by-side.

There has been nothing but bickering between Abby and Scott since he arrived in Genoa City; could this be the extent of their relationship, or could there be more? They seem to feed off each other and through their competitive spirit, they are able to challenge each other both personally and professionally.

The Young and the Restless’ Scott Grainger seems to be committed to Sharon McAvoy (Sharon Case) and wants to see where their relationship can lead, so could Scott really not have any feelings towards Abby and they will just go on with the love-hate relationship they have now?

Y&R fans would love to see Abby in a relationship, and Scott seems to be the perfect fit for her. They seem well suited for each other, neither having exes or children to contend with and surely Scott’s mother, Lauren Fenmore Baldwin (Tracey E. Bregman) would be much happier to see him with someone as “stable” as Abby. Could Scott and Abby finally acknowledge their feelings for each other and want to give it a shot at a real romance?

Sources tease Abby is really struggling and close to a meltdown at the charity concert and it looks like Scott will be the shoulder she leans on, leading up to them having a night of passion.

The Young and the Restless spoilers have revealed that Melissa Ordway is pregnant and expecting her second child with husband, Justin Gaston. Could Abby’s one night with Scott end up in her having a baby?

There are several factors pointing toward Abby and Scott getting together, but as avid fans of CBS’ The Young and the Restless, do you think Abby will end up with Scott? Please vote and let us know what you think.

Be sure to tune into CBS’ The Young and the Restless (Y&R) to catch up on this developing story and more. Check Soap Opera Spy often for updates, news, rumors and spoilers.

General Hospital Spoilers: Is Sonny Wrong – Can He Even Walk Away from the Mob?

The Young and the Restless Spoilers: Abby Sees Nikki Kissing Jack – Victor Must Be Told