The Young and The Restless Gina Tognoni, Amelia Heinle, and Jason Thompson Tease Their Storylines 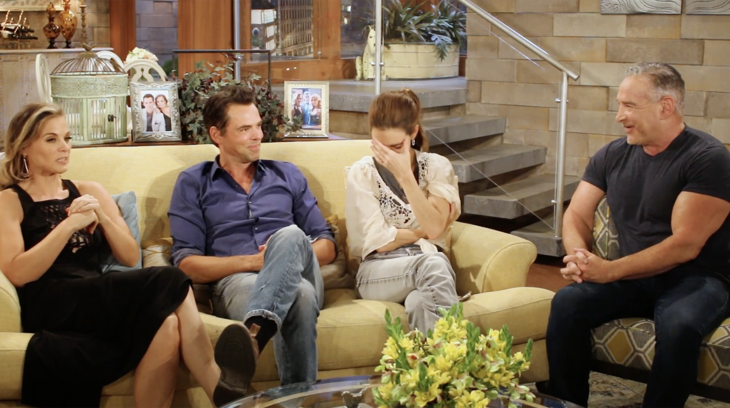 The Young and the Restless (Y&R) spoilers tease that Victoria Newman (Amelia Heinle) and Phyllis Abbott (Gina Tognoni) are going to fight dirty for Billy Abbott (Jason Thompson).  Victoria’s head injury becomes a major storyline. And, will Phyllis find out that Billy hacked into her computer numerous times?   All of that and more revealed in Michael Fairman’s newest chat with Amelia, Jason, and Gina.

The Fight For Billy

Phyllis and Billy have been happy together for several months.  Victoria didn’t even want her ex-husband back until she realized he moved on with Jack’s ex-wife.  That’s when Victoria made a move on her ex and suggested they get back together. It brought up the old feelings for them both.

Y&R spoilers indicate that Phyllis knows that Victoria wants her man and refuses to let her take him from her.  She knows they share history and children, but she believes she belongs with Billy and Victoria should just move on. Amelia reveals that the ladies will fight for Billy and neither woman is afraid to fight dirty.  It should be interesting to see which one gets the prize!

The Young and the Restless spoilers indicate that Victoria’s head injury is serious. Apparently, the headaches and blackouts will lead to a diagnosis down the road, and it could tie into Billy’s conflicted feelings for Victoria.

Desperate to find answers, Billy hacks into Phyllis’s computer and gets information to give to Victoria to use for Brash & Sassy’s benefit.  Billy knows that it is wrong and could blow up in his face, but he does it anyway to help Victoria take Brash & Sassy to the next level.

When Phyllis finds out of his betrayal—because she WILL find out— Billy will be put in a difficult spot.  He will have to explain why he risked his relationship with her for Victoria’s business.  It should be interesting to see how it all turns out in the next few weeks.

Stick with Soap Opera Spy for more The Young and the Restless (Y&R) spoilers, news, and casting news!