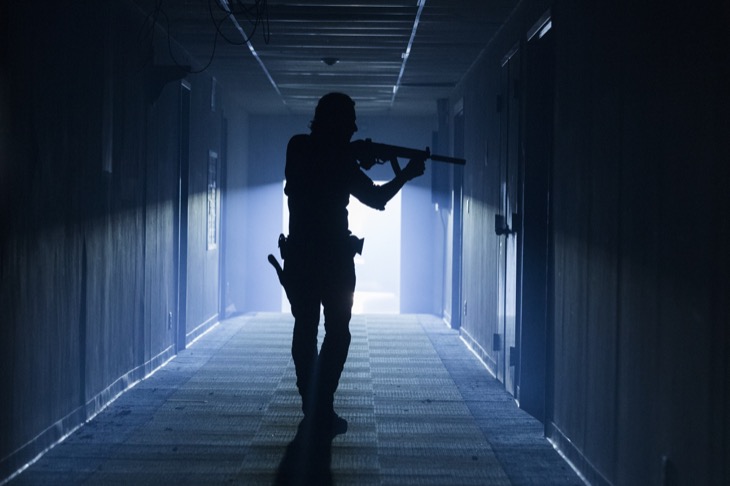 The Walking Dead season 8, episode 2 spoilers confirm that someone from the first season will make an appearance. It will be a shock to Rick Grimes (Andrew Lincoln.) However, don’t expect a heartwarming reunion. Old friends will turn out to be on the opposite sides of a war.

The Spoiling Dead Fans shared that Morales (Juan Gabriel Pareja) will be appearing the episode titled “The Damned.” Fans have wondered what happened to the family for a long time. Viewers may recall that Rick and the others planned to check out the CDC. However, Morales took his loved ones to try to reach their family members.

Somewhere along the way, they encountered Negan (Jeffrey Dean Morgan.) It is teased that Morales is one of the Saviors. In a photo, the character looks mean and menacing. He’s not the same man that viewers will remember from the first season. It appears that Morales should have gone with Rick instead of venturing out on his own.

What is interesting about Morales being part of the Saviors is the possibilities. Showrunner Scott M. Gimple told the Hollywood Reporter why Rick didn’t kill Negan in “The Walking Dead” season 8 premiere. It was to give the Saviors a chance to get out of the line of fire, perhaps even switch sides.

As it was said last season, the Alexandrians believe some of the Saviors are not there by choice. IN a sense, some of them are innocent survivors, forced to live under Negan’s reign of terror.

It is unclear if Morales is an innocent at the Sanctuary or if he is one of the Saviors that is happy to do Negan’s work. However, Negan isn’t a full villain, as comic book readers know.

He is too complex to categorize. In fact, his leadership stopped some horrendous things that the Saviors were doing in the first place. Rick and Negan are more alike than either care to admit. However, their leadership styles are completely different.

“The Walking Dead” season 8 spoilers previously teased that Dwight (Austin Amelio) would help Alexandria. Will Morales join him, or will he remain committed to Team Negan?

What do you think will happen when Rick and Morales meet once again? Keep watching the AMC series and check back with Soap Opera Spy for the latest in “The Walking Dead” spoilers, updates and news.

The Young and the Restless (YR) Spoilers: Victoria Must Change Her Life – Victor Sasses Brash Billy