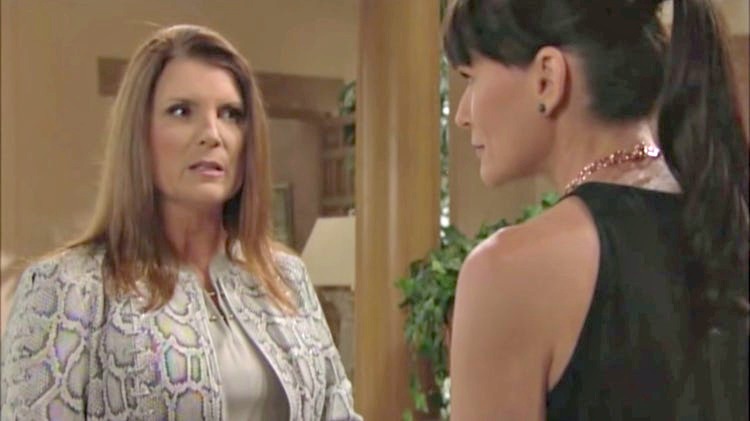 The Bold and the Beautiful (B&B) spoilers for the week of September 18 reveal that Sheila Carter (Kimberlin Brown) finds herself in a jam when she comes face-to-face with Quinn Fuller (Rena Sofer), again.  Also, Brooke Logan (Katherine Kelly Lang) begins to consider that Bill Spencer (Don Diamont) might not be the man for her.  It looks like a great week ahead on B&B.

CBS Soaps In Depth reports that Quinn arrives unannounced at Sheila’s hotel room and sends Sheila’s stress through the roof.  Apparently, Sheila had to hide the portrait she had out that will replace Quinn’s in Forrester mansion once Eric Forrester (John McCook) marries her. However, things don’t go according to planned, and the ladies end up on the floor in another catfight!

Quinn refuses to let Sheila bully or threaten her in any way. B&B spoilers state that Sheila is baffled on how to defeat Quinn in the end as the woman is far from weak.

The Bold and the Beautiful spoilers state that Brooke begins to consider the obvious –she’s been duped by Bill, and she needs to get out NOW.  She believed that he was a good man and the right person to spend her life with.  As it turns out, he is a criminal and could have hurt Sally Spectra (Courtney Hope) in the fire.

Brooke was devastated to learn her stallion is a criminal, but will his actions end their short marriage?  B&B spoilers reveal that Brooke has some thinking to do and weighs her options about the future of her marriage.  While she is soul searching, Ridge Forrester (Thorsten Kaye) makes a plea for her one last time as he believes they are meant to be together.

Brooke begins to consider that this may not have been Bill’s first time breaking the law.   Can Bill and Brooke’s marriage survive the Spectra fire?  Stick with Soap Opera Spy for more The Bold and the Beautiful (B&B) spoilers, news, and casting updates!

Dancing With The Stars Mark Ballas Dishes On His Return To DWTS, Julianne Hough’s Exit, And Lindsay Stirling