The Bold and the Beautiful POLL: Sheila, Quinn or Katie – Who Is Your Favourite Crazy? VOTE! 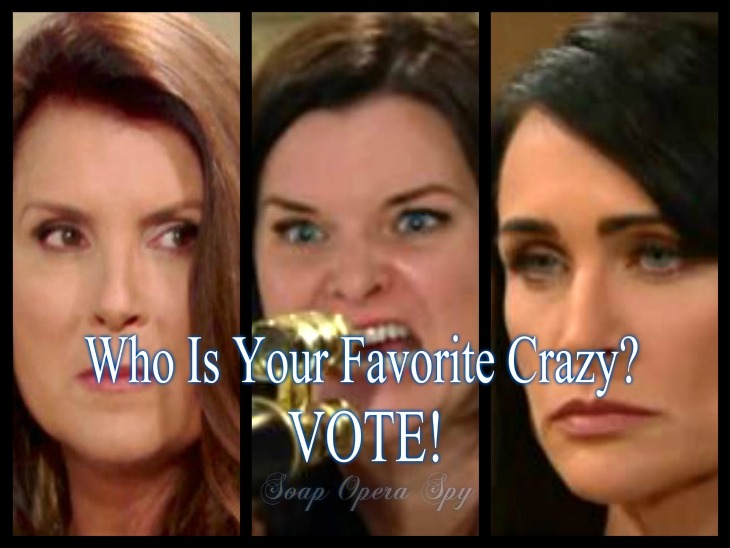 The Bold and the Beautiful (B&B) spoilers reveal Sheila Carter (Kimberlin Brown) has lost her control over Eric Forrester (John McCook) after he decided to return home to his estranged wife, Quinn Fuller Forrester (Rena Sofer); but what Sheila didn’t know is Eric is telling Quinn to get out of his house and he wants a divorce.

Sheila has been working very hard to convince Eric she is not the demented killer everyone near and dear to him remember her as; but what will it take for her to turn back to her demented ways to ensure that she remains close to Eric and hopefully back into his arms?

The Bold and the Beautiful spoilers tease that Quinn Fuller may also take a turn for the worse when she is kicked out of her home and all her professional connections ruined because she couldn’t keep her lips to herself. Quinn is known for being psychotic, willing to push people, like Ivy Forrester (Ashleigh Brewer) into the Sienne River in an attempt to give her son, Wyatt Spencer (Darin Brooks) the woman of his dreams. Quinn had no qualms acting psychotic when she shoved ex-husband, Deacon Sharpe (Sean Kanan) off a cliff in an attempt to silence him from destroying her life with Liam Spencer (Scott Clifton) aka Adam.

B&B’s Katie Logan (Heather Tom) seems to be the most mild in this group of catty women, but there is no ignoring the fact that she can be a little off-the-wall and looney. She has suffered from depression and although she hasn’t done things nearly as bad as Quinn and Sheila, she did lose her cool when she saw how Quinn and Ridge were acting behind Eric’s back and pulled a gun on her in a blinding rage.

If you had to choose, which woman is your favorite “crazy” person on the CBS daytime drama – Demented Sheila, Psychotic Quinn or Looney Katie? Please vote and let us know what you think.

Be sure to tune into CBS’ The Bold and the Beautiful (B&B) to catch up on everything happening in and around the Los Angeles’ Fashion industry. Check Soap Opera Spy often for updates, rumors, news and spoilers!

The Young and the Restless Spoilers: Reed and Mattie Story – Summer Souls Welcomed