Soap Opera Ratings Week of Oct 30 – Nov 3 – General Hospital in the Lead of all Daytime Soaps! 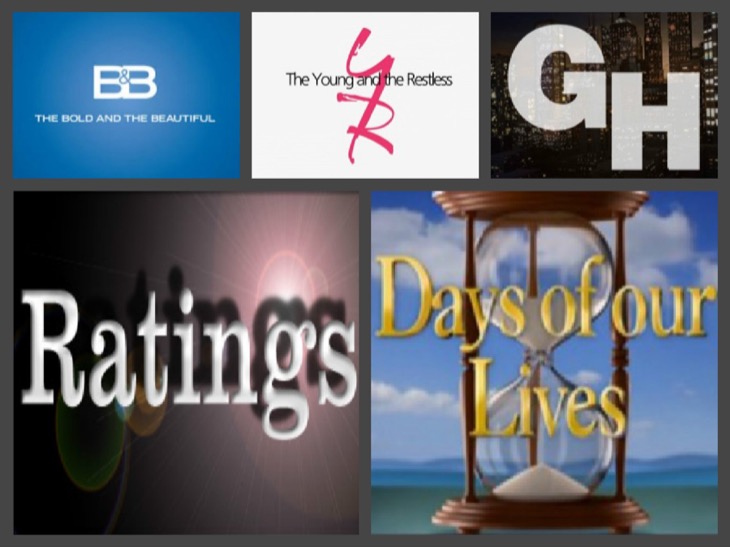 The Soap Opera Ratings for the week of Monday, October 30 through Friday, November 3, 2017 were reported by the Soap Opera Network. There were no major interruptions or breaking news reported that would have influenced the ratings of any of the soap operas this week. ABC’s General Hospital is the reigning champion this week in all categories, while the remaining three soap operas dropped dramatically from the previous week!

NBC’s DOOL was the one daytime soap opera that dropped the most out this week losing 108,000 from the previous week, leaving them with 2,190,000 in total viewership. It also lost 20,000 in women aged 18-49. The week began with Sami (Alison Sweeney) proving she is the same woman we have known and loved since her early teenage years. Eve (Kassie DePaiva) blew into town, not only revealing she married Deimos (Vincent Irizarry) but also owns Basic Black. Paul (Christopher Sean) sees Will (Chandler Massey) working at a bar, but keeps that information to himself while all of Salem searches for him and Lucas (Bryan Dattilo) continues to shove Adrienne (Judi Evans) right back into Justin’s (Wally Kurth) arms.

ABC’s GH is number one in all categories this week, gaining 13,000 in total viewership with a total of 2,763,000 but a significant increase of 53,000 among women aged 18-49. This it the first time as sole #1 since the week of June 9 – 13, 2014! There is no doubt that Jason (Billy Miller) and Patient Six (Steve Burton) coming face to face was one of the main reasons the ratings rose so much. Andre (Anthony Montgomery) continues to be deeply concerned with what is happening with Six. Finn (Michael Easton) doesn’t give up on his part when it comes to Anna (Finola Hughes) and her attempt to flush out Cassandra (Jessica Tuck) and Valentin’s (James Patrick Stuart) connection. It will be interesting to see how the truth of Jason and “Drew” plays out and who will be the one true Jason and how people will react to that.

CBS’ B&B lost 71,000 in total viewership, ending up with 3,491,000 in total viewers. The CBS soap opera also lost 24,000 viewers among women between the ages of 18-49. Liam (Scott Clifton) was duped once again by Dollar Bill Spencer (Don Diamont), even after Steffy (Jacqueline MacInnes Wood) did a favor for Bill. Bill goes ahead with the demolition of the building, having no idea that his son, Liam and Sally Spectra (Courtney Hope) were still inside after he suggested a “sit-in”. How will the Spencer family recover from such betrayal and how will Steffy and Liam’s marriage survive him always being by Sally’s side?

Related: The Bold and the Beautiful (B&B) Spoilers: Steffy Feels Guilty, But Can She Really Stay Away from Bill?

CBS’ Y&R dropped 41,000 viewers, leaving them still at the top of the leaderboard with 4,415,000 in total viewership. However, the CBS soap opera lost the most (-37,000) among women aged 18-49. Cane (Daniel Goddard) is confronted repeatedly about living with Juliet (Laur Allen). Brash & Sassy facial products are toxic and the mystery begins. A fire breaks out at the Underground, trapping many of the young teens inside. At this point, it was unclear whether Nick (Joshua Morrow) or someone else lit the fire at the Underground, as he was the one seen lighting matches after a run-in with his father, Victor (Eric Braeden).

How do you feel about all the storylines that happened this week and how would you rate all the daytime soap operas. Please let us know what you think!

The Young and the Restless (YR) Spoilers: Thanksgiving Day in Genoa City – Some Residents Count Their Blessings