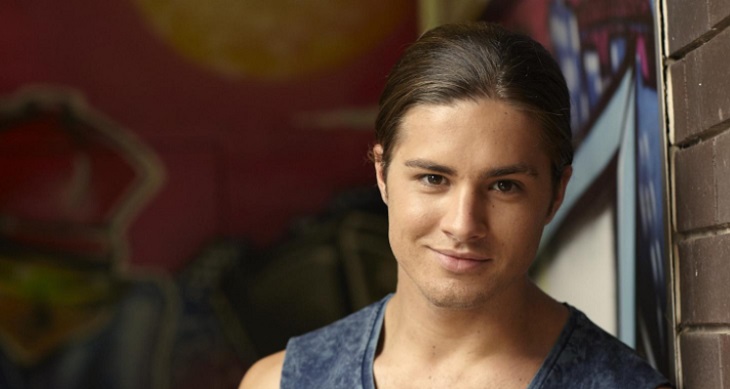 Lucky Neighbours viewers are about to see a lot more of hunky Tyler Brennan (Travis Burns) in the coming weeks. What precipitates his increased air time? Tyler is set to be hit by a blast from the past, albeit one he never knew existed!

Tyler has been through the wringer recently, first with his mother Fay Brennan (Zoe Bertram) arriving on short notice in Erinsborough, then having to absorb the news that his father is dying. Fay showed up in person to deliver the stinging news to her three sons, Tyler, Mark Brennan (Scott McGregor) and Aaron Brennan (Matt Wilson), but before they could act, tragedy struck.

The brothers had a volatile history with their father Russell, and needed to sort out their feelings before they ultimately came to the conclusion that they would make the journey to see him on his deathbed. But all of that indecision came at a cost, and Russell died before they could get to him. As a result the brothers felt a bit of guilt, but it was nothing compared to the emotions that further rocked Tyler last week.

When a guilt-ridden Fay finally confessed to her sons that abusive Russell wasn’t Tyler’s biological father, Tyler had no idea how to feel about the bombshell revelation. But now he has no choice but to confront his reality since his biological dad Hamish Roche (Sean Taylor) sets about making his presence known on Ramsay Street!

According to Burns, viewers are in for a boatload of drama as Tyler and Hamish come face to face. The Aussie star’s revelations about his upcoming storyline can be found on Neighbours’ official website. “Without saying too much, his arrival will affect everyone on Ramsay Street,” detailed Burns. “This is one of the biggest storylines I’ve done. There are a lot of emotional scenes coming up. Tyler has a lot of arguments and breaks down in tears at one point …”

We can’t wait to see Burns bring it in this front burner storyline!  Check back with Soap Opera Spy for more Neighbours spoilers right here!