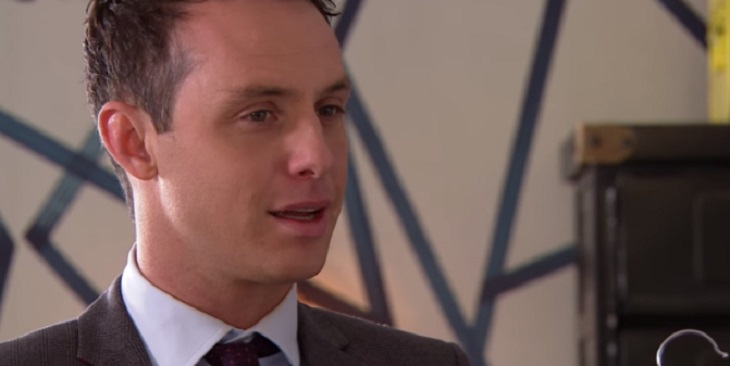 Hollyoaks spoilers tease that Ryan Knight’s (Duncan James) dual secrets about to be blown out of the water, possibly making the discoverer his next murder victim.

In the coming days lawyer James Nightingale (Gregory Finnegan) gets the goods on Ryan, but will he make sense of it all before suffering a similar fate as Amy Barnes (Ashley Slanina-Davies)?

James thinks that young Harry Thompson (Parry Glasspool) killed the blonde and lovely Amy. He’s about to get the surprise of his life when he begins to suspect that Ryan is the real killer and that the young man he tried to protect is in fact innocent.

But first Tegan Lomax (Jessica Ellis) will complicate things by insinuating herself into Ryan’s orbit. She’s got the hots for the hunky killer and the savvy guy decides to make the most of it. He may be immoral, but he’s smart!

Earlier  on Hollyoaks, Ryan and Kyle Kelly (Adam Rickitt) were seen by James, who gets a sneaking suspicion that something is going on between these two.

The two men’s unease is as apparent as Ryan’s bulging biceps, so James makes a mental note to look into this intriguing matter further.

But Ryan is two steps ahead of him, and he takes advantage of Tegan’s vulnerability to cover his tracks. Poor Tegan has no idea, but when she and Ryan sleep together, it’s only an act on Ryan’s part. Cad!

Nonetheless, Ryan teases the charade out to the fullest, and these two make their couple status public.

Unconvinced by this sham, James will dig into Kyle’s past in the hopes of discovering the truth about Ryan. It remains to be seen what he’ll find, but chances are it isn’t very wholesome.

In the midst of the soapy drama, Hollyoaks spoilers indicate that Leah Barnes (Elà-May Demircan) voices her concerns about Tegan attempting to replace her mom Amy. Will Tegan be able to get through to the young girl or will she be too distracted by her burgeoning relationship with her new heart throb?

Days of Our Lives (DOOL) Spoilers: Brady and Eric Have Another Tense Encounter