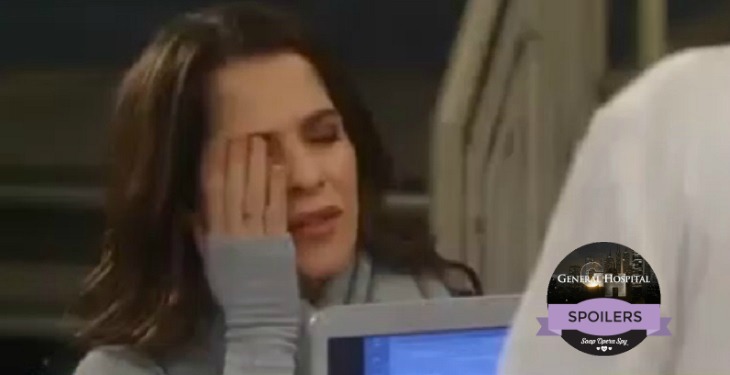 General Hospital’s Nelle Hayes (Chloe Lanier) had been asked by her boss Carly Corinthos (Laura Wright) to prepare a special spot for her and her husband, Sonny (Maurice Benard) to rekindle the love they both thought was forever lost.

Michael knew were the cabin was and offered to go with Nelle, once there they learn they are virtually trapped because of the heavy snowfall and the roads are no longer safe to travel.

At the Metro Court, Sonny has confided in his best friend, Jason Morgan (Billy Miller) that something isn’t quite right with Carly’s assistant Nelle; even telling him about her planting her bra in his bed months after they slept together in hopes that Carly would find it; after the revelation Jason asks Sonny if he is okay.

General Hospital’s PCPD Police Commissioner, Jordan Ashford (Vinessa Antoine) angrily confronts PI Curtis Ashford (Donnell Turner), blaming all her woes on him. GH spoilers show her blaming him for losing her boyfriend, Dr. Andre Maddox (Anthony Montgomery) and now Curtis may have also cost her, her job. Is Jordan really so innocent that she can put all her troubles onto Curtis?

Samantha Morgan (Kelly Monaco) comes to General Hospital to see her brother, Dr. Lucas Jones (Ryan Carnes), concerned about their father, Julian Jerome (William deVry); asking if Lucas has heard from him at all. Meanwhile, Olivia Falconeri (Lisa LoCicero) meets with Julian Jerome (William deVry), the father of her youngest son, Leo and demands he tells her who is after him now.

GH’s Ned Ashton (Wally Kurth) know what he wants when it comes to his life with Olivia, but he is heartbroken and confused when he meets with her son, Dante Falconeri (Dominic Zamprogna) announcing that he has asked his mother to marry him. What kind of advice with Dante have for Ned?

At General Hospital, as Dr. Robin Scorpio Drake is with her mother, she senses someone at the door, she asks who is there and sources reveal it is Liv St. John/Jerome (Tonja Walker); will Robin see her face or will Liv escape before she is discovered?

Be sure to tune into ABC’s General Hospital (GH) on Tuesday, February 21, 2017 to catch up on all these stories and more. Check Soap Opera Spy often for updates, news, rumors and spoilers!

‘Days Of Our Lives’ Spoilers: Chloe Wins Custody – Nicole’s Dramatic Breakdown, How Far Will She Go?

The Young and the Restless Spoilers: Billy Crosses A Line – Can Colin And Jill’s Marriage Survive Latest Crisis?