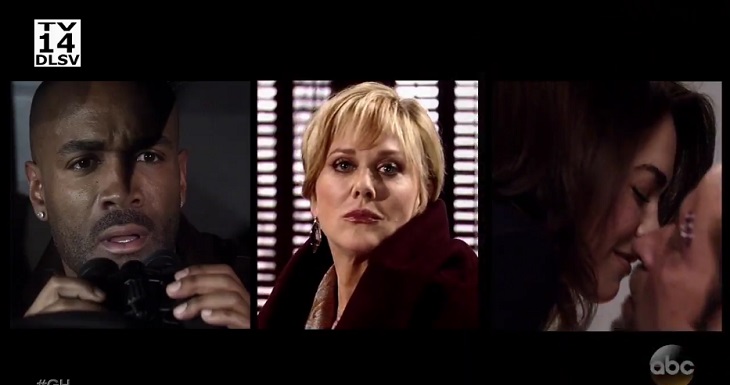 The newest ABC General Hospital video promo teases “All this week GH is turning up the heat and cranking up the crazy!” So it appears we have some exciting stuff heading our way.

In the General Hospital spoiler video you see Curtis Ashford (Donnell Turner) saying to Jordan Ashford (Vinessa Antoine) “You want me in your bed!,” which is pretty much the truth. She has definitely been in denial and you can tell just by her body language that she wants him.

Spoilers indicate that Jordan’s love life will start to crumble as she is stuck between two men and does not know which she wants to be with. So it looks like we have a love triangle heading our way.

As far as Elizabeth Webber (Rebecca Herbst) and Franco Baldwin (Roger Howarth) goes, General Hospital spoilers tease they will definitely be turning up the heat. They finally get a chance to settle down and take time for themselves since so much has happened over the last few weeks. The odds has definitely not been in their favor lately. Now that’s about to change, but for how long?

Related: Griffin Poses a Threat to Liz and Franco – Love Triangle Ahead

Olivia Jerome (Tonja Walker) tells her brother Julian Jerome (William DeVry) that this is a perfect time to strike. In recent events Sonny Corinthos (Maurice Benard) and Jason Morgan (Billy Miller) set it up to make it look like they were over investigating the car bomb as Julian listened in. So, it could be that Olivia thinks they are at their weakest. Little does she know they are still gunning for her and will not stop till they figure out who she is.

So GH fans be sure to tune ABC’s General Hospital for lots of good things to come. You will not want to miss it. Don’t forget to check often with Soap Opera Spy for all your latest General Hospital spoilers, news, updates, and much more.

This week #GH is turning up the heat and cranking up the crazy! pic.twitter.com/L08TssP84A