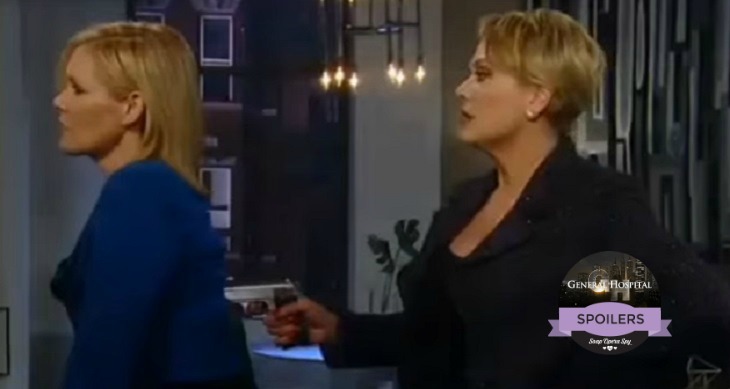 Liz explains that she understands she is in denial about Dr. Hamilton Finn (Michael Easton); but Hayden stands her ground refusing to any denial.

Finn may be the person who saved General Hospital from being sold to developers; but the heroism faded fast when lab technician, Brad Cooper (Parry Shen) had observed how shaky Finn was when attending to a patient.

Brad shared his concerns with Dr. Griffin Munro (Matt Cohen), who called Finn out on his addiction; and that he is a danger to himself and the patients of the hospital.  When confronted, Finn tells Griffin to do what he needs to do; Griffin warns him that he intends to.

GH’s Ava Jerome (Maura West) is just beginning to enjoy her freedom, after being falsely accused of killing Morgan Corinthos (Bryan Craig); but when she returns home she finds her older half-sister Liv St. John Jerome (Tonja Walker) waiting for her. Liv pulls a gun on Ava and demands to know where their brother, Julian Jerome (William deVry) is. Will Ava risk her life for the brother who left her to rot in jail?

Related: Love, Honor, and Cherish: The Greatest Wedding Moments From All My Children,General Hospital, and One Life to Live

Alexis Davis (Nancy Lee Grahn) comes to see her daughter, Samantha Morgan (Kelly Monaco) and her brand new granddaughter, Emily Scout; but the conversation quickly turns to Sam’s father, Julian. Sam quickly suspects something and asks her mother if she is worried about him.

General Hospital sources show him visiting Anna Devane (Finola Hughes), learning that Robin is in trouble. Will Jason chase after Liv to find Robin, or will he stay with his wife and newborn daughter, as promised?

GH’s Police Commissioner, Jordan Ashford (Vinessa Antoine) had gone after Rudge (David Lee) by herself the other day. She was left lying on the ground after being bashed over the head with a lead pipe. Spoilers reveal Curtis Ashford (Donnell Turner) will open the same door she had before she was assaulted. He is heard saying, “oh no”. Does he find Jordan, and is she alive or dead?

Be sure to tune into ABC’s General Hospital (GH) on Friday, March 10, 2017 to catch up on all the intense stories happening right now. Check Soap Opera Spy often for updates news, rumors and spoilers!