‘General Hospital’ RUMOR: Sparks Fly Between Curtis And Ava – Will Curtis Be Torn Between Lady Cop And Ms. Gangster 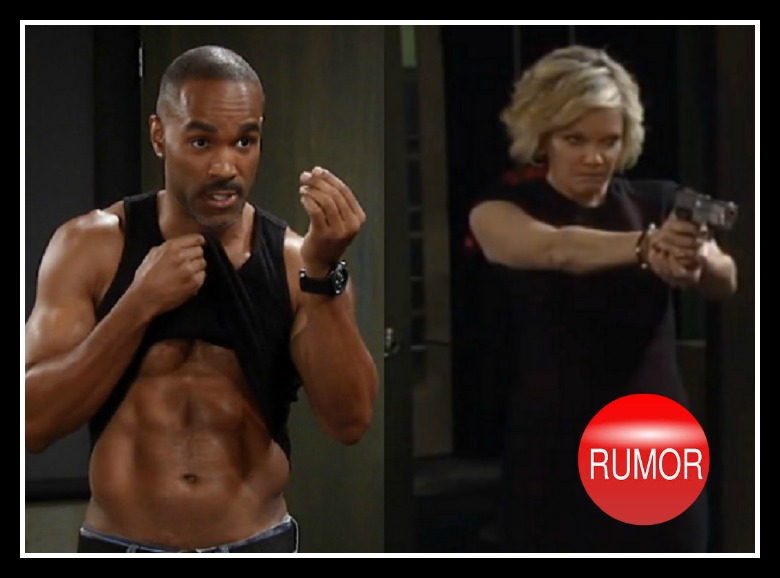 Viewers of General Hospital were treated to a lesson in chemistry testing 101 on Wednesday’s sizzling episode.  The infamous mob princess Ava Jerome (Maura West) found herself in a ripe with explosive possibilities face off with super hunk P.I. Curtis Ashford (Donnell Turner).

Working with former mobster Jason Morgan (Billy Miller), Mr. Ashford showed up at Ms. Jerome’s art gallery under the assumption that Ava is the orchestrator behind the accidental death by car bombing of Morgan Corinthos (Bryan Craig).

The moment their scenes commenced, the chemistry between the two as they sized up one another was palpable to say the least. It was oh so delicious to watch as Ava played off her skepticism as to whether Curtis was there for art or the artful dodge of some other more infamous reason. In return the resourceful detective more than held his own imparting a surprising bit of knowledge regarding art, much to the amused surprise of the mobbed up art dealer.

By the time Curtis (in a truly humorous moment) after his credit card declined the $23,000 charge for one of Ava’s art pieces headed for the nearest exit, the stage had been set for hopefully more fun and games to come.

There are rumors and speculation abounding regarding these two. Could the suave detective be up to the task of mending the broken heart of the lonely and beautiful Ms. Jerome? Who’s own burgeoning love affair with Nicholas Cassadine (Tyler Christopher) was cut short by his untimely demise at the hands of his Uncle Valentine Cassadine (James Patrick Stuart).

Also let’s not forget the other woman in Mr. Ashford’s life. Namely his former sister in law and Port Charles’s top cop Jordan Ashford (Vinessa Antoine). Who herself is involved in a relationship with General Hospital shrink and erstwhile spy Dr. Andre Maddox (Anthony Montgomery).

On a recent bid to secure a statement from underworld lackey and the unknowing placer of the car bomb that killed young Morgan Corinthos, Buzz (Don Swayze). Things got extremely hot and heavy between the two ex in-laws. They narrowly avoided hitting the sheets while in a Baltimore hotel room.

It is apparent that Commissioner Ashford is about ready to succumb to the charms of Curtis despite her protestations and ongoing relationship with Dr. Maddox. Could this event lead to Andre discovering his own one-time feelings for super spy and former patient Anna Devane (Finola Hughes)?

The domino effect of these confusing and twisting relationships could provide interesting story for sometime to come.

If indeed Ava & Curtis became an item, how would Jordan react both as a police officer as well as a woman immensely attracted to Curtis? How would this development affect Curtis’s partnership with Jason? Would Curtis even take a walk on the wild side with Ava, when he seems driven to restore himself to the ranks of police detective? Would Jordan offer her former in-law and police partner the position on the P.C.P.D. that he so desperately craves as a caveat to leaving Ms. Jerome alone?

Could Ava lose herself in the hunky good guy’s charms and alienate her brother Julian Jerome (William DeVry) by dating a man on the side of the law?

How about if Nicholas is alive after all? After all his body was not found and we all know what that means in the town of Port Charles. Would Ava be torn between the two?

So there you have it. What do you think of the chemistry between Ms. West and Mr. Turner? What about the sexual tension between Jordan and Curtis? Would a returning Ty Christopher sweeten the pie?

Whatever turns out to be the ultimate answers, GH viewers are in for some rocking and rolling from General Hospital Executive Producer Frank Valentini and his writers. They have laid a nice table of soapy goodies.

Can’t wait to be served. It should be hot. Keep watching.

‘The Young and the Restless’ Spoilers: Victoria Acts on Victor’s Advice – Cane Feels Squeezed Out