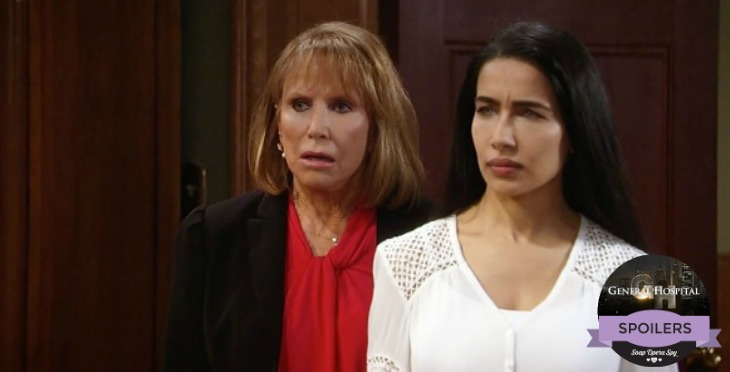 Monday begins with Tracy (Jane Elliott) telling Ned (Wally Kurth) that Samira (Ivy Natalia) needs the painting and she’s giving it up. Dillon (Robert Palmer Watkins) hugs Tracy. Samira thanks Tracy for her kindness. Ned pulls the DNA results out from his jacket pocket. He tells Monica (Leslie Charleson) how Finn (Michael Easton) did a DNA test on Samira per Tracy’s request. Tracy reads the results and tells Samira she’s not related to Edward but still giving her the painting. Tracy tells Ned about the ring and journal. Ned stops Tracy because he has another solution.

Ned escorts Samira out of the room. He gives her a check for $10K to figure her life out. Samira didn’t mean to hurt anyone and takes the check. Ned tells her to call for a cab at the front gate. Samira leaves. Ned tells everyone only one person was obsessed with that painting. Ned opens the door and Ashton walks in. Ashton was running a con with Samira. Ned found out Lila started the tradition of singing at Thanksgiving, not Edward. Ashton called immigration on Samira. Tracy grabs the poker to hit Ashton but Dillon grabs her arm. Tracy throws Ashton out of the house. Ned thinks Ashton is finally gone this time. Dillon apologizes for calling the painting stupid. Monica says she can hang it in the den. Tracy knows exactly where to hang it.

Anna (Finola Hughes) on the pier wearing ear buds listening to Valentin (James Patrick Stuart) and Nina (Michelle Stafford) talk. Nathan (Ryan Paevey) jogging by and startles Anna. She asks “Can I help you”? Nathan asks if she’s okay because she acts as if he’s a stranger. Anna blames the meds she taking. Nathan updates Anna on Maxie (Kirsten Storms) being fired and living in Portland. Nathan leaves.

Nathan arrives and updates Nina on Maxie. Nina confides in Nathan she may be losing Valentin to Anna. Nina mentions how much Anna disliked him but now giving him watches. “It’s as if someone flipped a switch with Anna”. Nathan reassures her that Charlotte and Valentin are lucky to have her. Nathan leaves.

Later Anna is sitting on the pier rubbing her injured ankle. Valentin arrives and sits down beside Anna. Anna mentions she would change everything regarding WBS if she could. She touches his arm and says not everything. They have no idea Nelle is watching. Valentin tells Anna they both moved on. He asks Anna about her necklace. Anna places the necklace in his hands. Valentin has a blank stare. Nelle arrives back to Nina’s office. Nelle lies and tells Nina that Valentin was on the dock but alone. Nelle reassures Nina she has nothing to worry about. 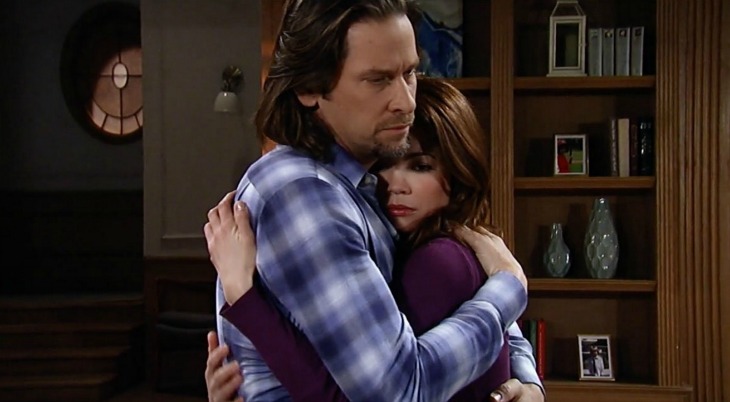 Liz (Rebecca Herbst) tells Franco (Roger Howarth) that Sam (Kelly Monaco) and Jason (Billy Miller) are searching for clues in Jake’s (Hudson West) book from Helena. Franco insists they won’t find anything. Liz worried that Helena will do something to Jake. Franco reminds her Helena has been dead for a year. Jake enters the room and they discuss his upcoming birthday. Franco suggests they go camping. Jake says no he can’t go. Jake goes to his room. Franco and Liz go to bed. Later Jake is downstairs with his drawing a Chimera.

Sam takes the book from Jason thinking a new set of eyes might help. Sam searching through the book and suggests maybe Jake doing this for attention. Jason is certain he’s telling the truth. Sam uses her laptop to search for information. Sam finds information Jason was admitted August 2014. Jason mentions Helena saying he would never remember what happened on the island. Sam gets a bottle of tequila and accidentally spills some on the book. Jason finds 2 pages were sticking together. Jason pulls the pages apart and finds a drawing and says this it is. Sam asks what it is. “A Chimera” he replies.