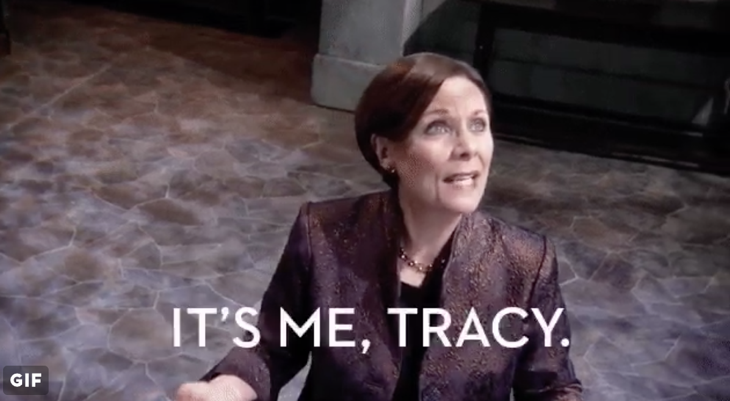 Monday’s GH begins with Michael (Chad Duell) arriving to his office to find Larry Ashton (Oliver Muirhead) there. Larry is looking for Tracy and in the wrong office. Ned (Wally Kurth) and Olivia (Lisa Cicero) walk in with Ned telling Larry to stay away from Mother. Larry introduces himself to Olivia as Ned announces their engagement. Larry says he’ll wait for Tracy to arrive for work. Ned says he will too. Michael and Olivia leave to find his assistant to check on why Tracy is late to work. Larry and Ned discuss the engagement and marriage. Ned has learned from his past marriages and won’t make the same mistakes with Olivia. Olivia is standing outside the office and hears this conversation. Larry is happy for Ned and congratulates him.

Michael brings alcohol to toast the engagement. His desk phone rings. Call from his assistant informing him Tracy went to Turkey. Larry spits his drink across the room when Michael informs them.

Laura (Genie Frances) and Tracy (Jane Elliott) arrive in Turkey at the Monastery that is supposed to have the painting. Tracy isn’t leaving without that painting. Laura wants to find a place to sleep but Tracy want to find the painting before Larry even finds outs she’s in Turkey. They’re interrupted when two Monks approach them with angry voices. Laura asks Tracy to be quiet while she speaks with them. Laura informs Tracy they are permitted to stay. The Monks show the ladies to their one bed room and told they are not permitted to leave the room. Tracy notices the odd way the men look at her. The discussion turns to Edward. Laura tells Tracy that Edward thought very highly of her. Edward wore his heart on his sleeve and saw a bright young woman that would surpass him each time he looked at Tracy. Laura says if this adventure is going to bring up bad memories they can end it now. Laura opens the door and they hear a female voice. Tracy leaves to investigate and Laura follows her. Tracy finds the two Monks carrying a painting and demands they stop. She pulls the cover off and it’s a portrait of Tracy.

Sonny (Maurice Benard) arrives to Sam (Kelly Monaco) and Jason’s (Billy Miller) apartment asking why they need to see him. They want Sonny and Carly (Laura Wright) to be Scout’s Godparents. Sonny accepts. Sam leaves to work on a case.

Joss (Eden McCoy) asks Carly if there’s anymore orange in her house. Carly has been busy and distracted. Joss mentions Sonny. Joss wants Carly to divorce Sonny. Carly tries to make her understand she’s not ready for a divorce at this time as she still loves Sonny.

Carly arrives to Jason’s apartment saying she needs to talk to him. Carly surprised to see Sonny there. Jason was going to call her later but asks her to be Scout’s Godmother. Carly realizes she and Sonny are Godparents together for Scout. Sonny says we can do this for Scout even though we’re not together. Carly starts to leave as Sonny stops her in the hallway. He wants to talk but she feels everything has been said. Sonny says okay and leaves.

Later Sonny is walking past Kelly’s leaving Diane a voicemail he has a job for her to do.

Jax arrives to Carly’s house and Joss answers the door. Jax tells Jax that things between Carly and Sonny are bad. Jax tells Joss that her Grandmother Lady J passed away last night in her sleep. Jax gives Joss a letter that Lady J wrote before she passed away. Joss crying and will read the letter later.

Alexis (Nancy Lee Grahn) sitting at Kelly’s drinking coffee. She feels as if someone is watching her. She decides to go outside. As she opens the door Jax (Ingo Rademacher) walks in. They sit down and Alexis tells Jax she feels Julian everywhere around her. She describes how Julian sounded sincere in his letter. Sam arrives to Kelly’s and says hello to Jax. They hug and he leaves. Alexis tells Sam about receiving another phone call and hearing noises at the house. She just can’t shake Julian. Sam updates Alexis on tracing the call to a phone booth. Sam is going to do some investigating but warns Alexis not to get her hopes up. Sam leaves.

Sam arrives home and Jason tells her Carly and Sonny agreed to be Godparents. Sam opens her laptop while updating Jason about chatting with Alexis. Sam shows Jason a screen shot of a man with his back to the camera using the pay phone. Sam gets notification from the bank that Julian credit card has been used.

Alexis leaves walks away from Kelly’s and a man in a hooded jacket is following behind her.

The Young and the Restless Spoilers Tuesday, April 4: Nick Grills Chelsea, She Fakes Passing Out – Gloria Causes A Scene – Phyllis Makes over Ravi