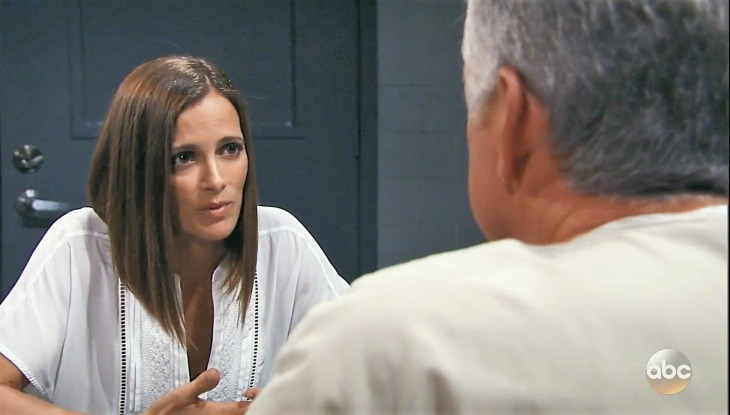 Monday begins with Kiki (Hayley Erin) telling Ava (Maura West) she’s taking her to the therapy session at the hospital. Ava refuses to go. Griffin (Matt Cohen) arrives and Ava quickly puts her mask on. Ava tells Griffin she’s spending the rest of her life inside her apartment. Griffin tells Ava she is hiding because she’s afraid.

Hayden (Rebecca Budig) tells Finn (Michael Easton) on the phone she’s out shopping. Hayden finishes the call as the guard brings her Dad in. Hayden asks if there is any money left I her Hedge Fund. Raymond explains there is none. Hayden tells him about changing her name and created a whole new life after he went to prison. Being with Finn gives her the chance to make up for all her mistakes. Jared wants her to steal money from the hospital but she doesn’t want to betray Finn or the hospital. Raymond says she has two choices. Steal the money or tell Finn the truth and hope he forgives you.

Sam (Kelly Monaco) is struggling to figure out if shooting Sonny (Maurice Benard) was real or a dream. Finn walks in and tells Sam the antibiotic is working but she needs clearance from Dr. Maddox (Anthony Montgomery). Sam wants to be able to differentiate between real life and her dreams. Finn tells Sam to let her mind and body heal and she’ll get answers in due time. Sam looks at her phone and sees text messages from her sisters. Felix (Marc Samuel) stops in and Sam asks if Sonny was shot. Felix confirms it and says Sonny is going to be fine. He’s just down the hall from her room. 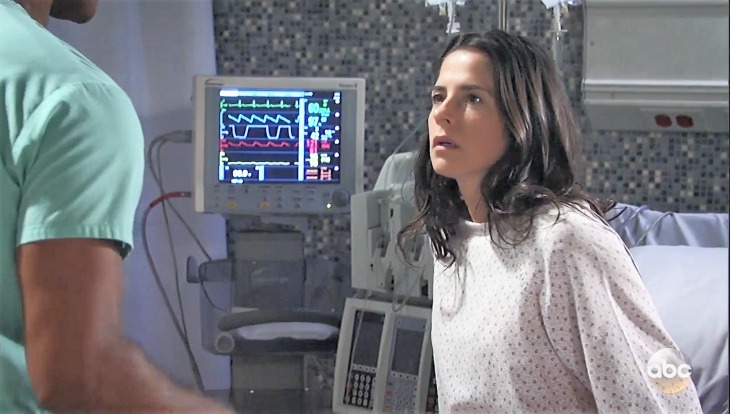 Sonny has flashbacks of Sam shooting him. Dante (Dominic Zamprogna) asks Sonny who shot him. Sonny says it’s all a blur and the last thing he remembers is Garvey shooting him. Carly tells Dante that Sonny needs to rest. Sonny asks Jason how Sam is doing. Jason reassures Sonny that Sam is doing fine and just needs plenty of rest.

Ava arrives too the hospital wearing her mask with a scarf over her head. Sam tells Ava she remembers helping her with the mask. Ava mentions their conversation and how Sam acted as if Sonny were her worse enemy. Sam doesn’t remember blaming Sonny for Ava’s scars. Sam says she doesn’t hate Sonny. Ava suggests maybe deep down she doesn’t want Jason working for Sonny. Sam becomes upset and yells to Ava she doesn’t know what she wants. Sam leaves. Ava gets up to leave and bumps into Kiki and Griffin. They are able to convince Ava to stay and give the therapy session a chance.

Hayden sitting in her office and Finn asks if she bought anything for their house while out shopping earlier. Hayden admits she didn’t go shopping but she get them plane tickets for some place far away.

Sonny dreams about Sam shooting him and pushing him into the pit. Sonny wakes up to find Sam standing over him.

The Young and the Restless Poll: Should Billy Marry Phyllis or Victoria? Vote!

The Young and the Restless Spoilers: Cane and Juliet Must Do What’s Right For Their Baby