General Hospital POLL: Which is Your Favorite Couple – Julian and Alexis or Carly and Sonny? VOTE! 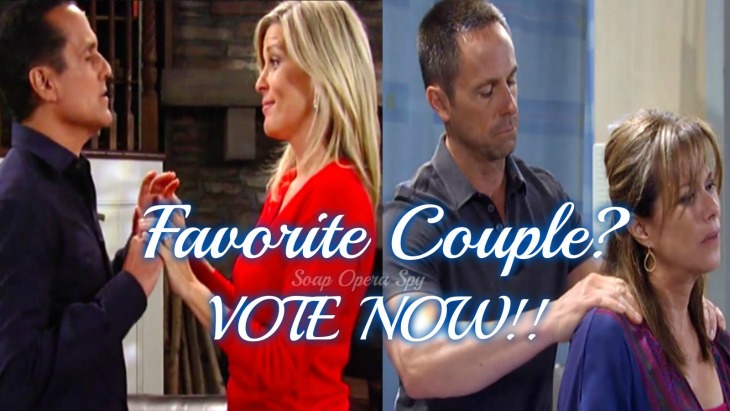 General Hospital (GH) spoilers reveal both super couples are on the mend as they all struggle to get passed they cruel things they have done to one another. GH fans are in a bit of an uproar about Julian and Alexis reuniting after he attempted to kill her, but how do you feel about Carly and Sonny’s toxicity?

When GH’s Julian Jerome (William deVry) arrived in Port Charles, he never had any intentions in falling in love with the woman he had a one-night-stand with as teenagers, Alexis Davis (Nancy Lee Grahn) and he definitely didn’t count on being a father, not once, but twice the second he hit town; but it happened!

Julian has done some pretty bad things to the people he loves, including basically holding his grandson, Danny’s life in his hands as he used him for insurance that his enemies wouldn’t harm him. He just about slit Alexis’ throat with the very knife that killed her mother and he helped cover up the evil deeds both his sisters, Olivia Jerome (Tonja Walker) and Ava Jerome (Maura West) have committed. Is he even redeemable at this point?

Alexis loves Julian, there is not doubt about it. She has fought to hate him and attempted to push him out of her mind again and again; but when they presumed he was dead, she had some sort of epiphany; she loved him despite all he has done and she truly is the one redeeming quality about him. Their love hasn’t been on General Hospital for decades but these two have amazing chemistry and their love is intense.

Check Out: One Life to Live – Thirty Years of Memories

GH’s Sonny (Maurice Benard) and Carly Corinthos (Laura Wright) have had this beautiful, yet toxic relationship for decades now. They love to hate each other and hate to love each other, viewers of the ABC daytime drama know that they are great at acting out and hurting each other the second something goes wrong; but their love runs so deep they will always remain connected.

Fans were not sure they would reunite after everything that happened since the tragic death of their son, Morgan (Bryan Craig). Fighting over an alleged affair between Sonny and Nelle Benson (Chloe Lanier) and an actual affair between Carly and Jasper “Jax” Jacks (Ingo Rademacher); to nasty divorce proceedings where Carly demands everything to Sonny sleeping with her divorce attorney.

It seems as Ava lay at death’s door in General Hospital, Sonny and Carly shared a moment that changed everything; it wiped out everything they had done to each other and looks like they are finally on the road to healing. When they sealed the night with a kiss, it is clear these two are ready to move forward.

Which couple do you like better? Please take our poll and let us know what you think. Be sure to tune into ABC’s General Hospital (GH) to catch up on everything happening in and around Port Charles. Check Soap Opera Spy often for updates, news, rumors and spoilers!