General Hospital POLL: What Do You Think is Wrong With Sam? VOTE! 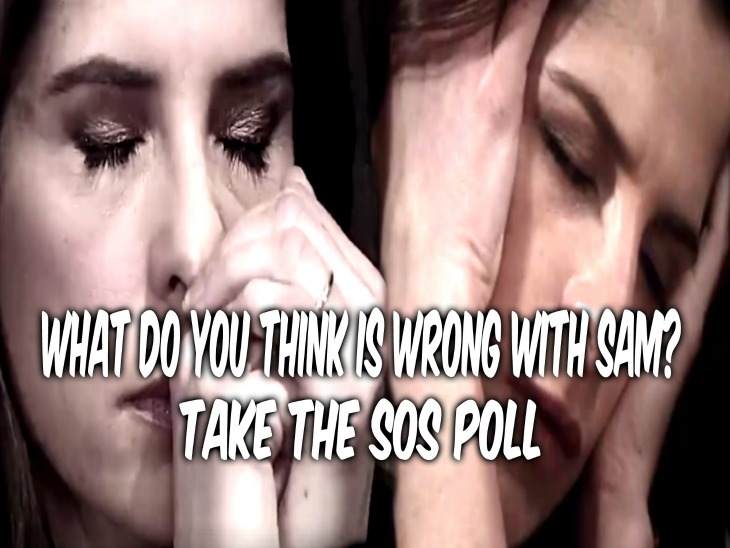 General Hospital (GH) has been showing Samantha “Sam’ McCall Morgan (Kelly Monaco) not acting right lately. She is having hallucinations, acting terrified and paranoid. She is on edge and out of control and fans are wondering what is truly wrong with her. What do you think is wrong with Sam?

GH’s Sam could be suffering from postpartum depression. It is not uncommon for the mother of a newborn to suffer from this and she is definitely showing signs of it with her anxiety, barely having any energy, she is quickly irritated. Could it really be that simple or a diagnosis?

Viewers of the ABC daytime drama know General Hospital is always on top of issues like mental illness. When Sam went to see Dr. Griffin Munro (Matt Cohen) he mentioned Post Traumatic Stress Disorder (PTSD) and that she may have that after everything her Aunt Olivia “Liv” Jerome (Tonja Walker) put her through and her traumatic labor and delivery of Scout. Sam is definitely showing signs of it with her nightmares, anxiety, paranoia, and being on edge and jumpy. How long is she going to carry a knife with her before she hurts someone?

Is Sam being poisoned? It would be entirely possible, as these irrational behavior has come on rather suddenly. Sam has always loved and trusted her husband, Jason Morgan (Billy Miller) and his close relationship with mob boss, Sonny Corinthos (Maurice Benard); she now feels Sonny is a threat to her husband and family with hallucinations of him taunting her. Who would want to poison Sam and why?

GH has many fans thinking what could possibly be wrong; what do you think about the curse Helena Cassadine (Constance Towers) placed on Sam when she was on her death bed. Sam had become increasingly obsessed with the curse recently, maybe she has manifested it in her mind, almost making it happen to herself.

Many people feel she may have a brain tumor; Sam is having sleep problems and mental confusion. Remember when she called Scout “Danny”? She also have become more aggressive while being completely terrified at the same time. She seems determined that if Sonny is no longer in the picture, her family and husband will be safe.

What do you think is plaguing Samantha Morgan? Please take our poll and let us know what you think. Be sure to tune into ABC’s General Hospital (GH) to catch up on everything happening in and around Port Charles. Check Soap Opera Spy often for updates, news, rumors and spoilers!