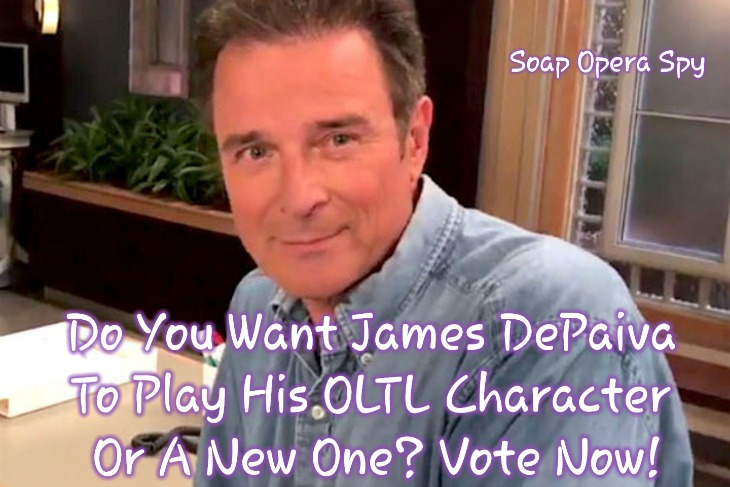 When news broke that soap legend James DePaiva joined “General Hospital,” a collective cheer rose from the soap community. Now the big question on fans’ minds is, what character will the handsome star play?

Do you want to see DePaiva reprise his role as debonair maverick Max Holden from the glory days of OLTL, or would you rather see him flesh out a whole new character on GH?

DePaiva is thrilled to be back on daytime television, but don’t count on the sly veteran to spill any beans just yet!

In a Facebook post he teased fans by saying, “Guess what? I’m back. On General Hospital. Just finished shooting my first episode. Hugged some great old friends. And enjoyed the beginning of a wonderful new adventure.”

DePaiva is married to Kassie DePaiva (Eve, DOOL); the beautiful couple met on the set of, “One Life to Live.”Who do you think the smooth talking DePaiva should play? Max Holden raised a ruckus in Llanview from 1987 to 1990 and from 1991 to 2003. In 2007 the good-hearted heartbreaker reappeared in the landmark show’s 10,000th episode.

Since ABC again owns the rights to the “One Life to Live,” characters, would you like to get reacquainted with Max if and when he pops up in Port Charles? Or would you rather see DePaiva originate a new GH persona when he joins his former cast mates Michael Easton (Finn) and Roger Howarth (Franco)?

Online speculation holds that DePaiva is being brought on in a new role, with most viewers thinking that he’ll play Jeff Webber, father of Nurse Elizabeth Webber(Rebecca Herbst) and Hayden Barnes (Rebecca Budig). Tell us what you want to see: James DePaiva to reprise his role as Max Holden, or to play a character specific to “General Hospital?”