General Hospital POLL: Is Josslyn Justified in Her Attitude Towards Sonny? VOTE! 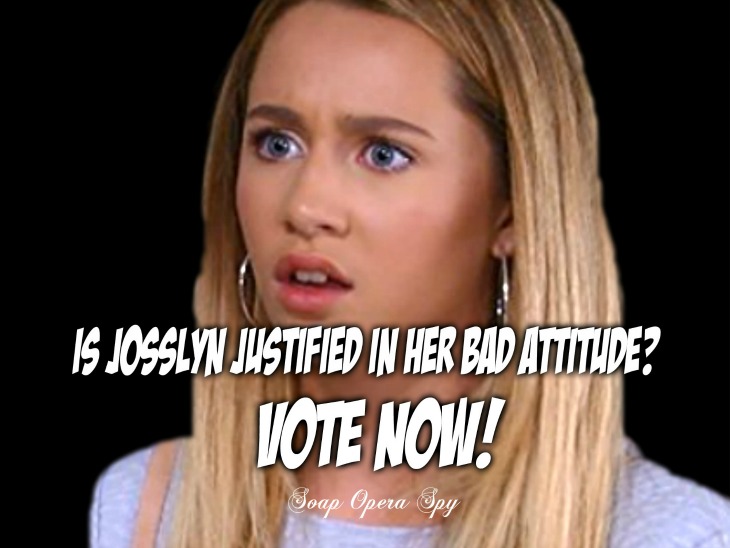 General Hospital (GH) spoilers reveal Josslyn Jacks (Eden McCoy) is not done giving her mother, Carly Corinthos (Laura Wright) a hard time about her complicated relationship with her estranged husband, Sonny Corinthos (Maurice Benard). GH fans know Joss has been very disrespectful to her mother and stepfather, do you think she is justified in her attitude regarding Sonny?

GH’s Sonny Corinthos may be a crime lord and shrewd businessman in Port Charles but when it comes his personal life he seems to act before thinking, especially when he is hurting and wants vengeance on those who are hurting him.

His marriage to Carly disintegrated when she learned about the supposed night he spent with her assistant, Nelle Benson (Chloe Lanier) to retaliate for his deception she spent the night in bed with another ex-husband, Jasper “Jax” Jacks (Ingo Rademacher); only to learn the only thing Sonny was guilty of was hiding a night he couldn’t remember. Nelle drugged Sonny into believe they had sex and her plan worked to destroy Carly and Sonny… at least for a while.

General Hospital’s teenager Josslyn Jacks has reason to feel angry with both Carly and Sonny, as she has watched them torture each other, only to fall in love with each other over and over again. She has been shipped back and forth between living at her mom’s house and then living with Sonny and Carly; you could say she has had a conflicting childhood constantly in the middle of things a child should never have to deal with. But does this give her the right to be rude to Sonny?

GH’s Sonny made sure Jax paid the ultimate price for sleeping with his wife, Carly; he had him deported for buying Nelle’s kidney to save a very young Josslyn – illegal activities! It seems that Josslyn forgets all the misdeeds and crimes her own father has committed yet hypocritically hates Sonny for anything he has ever done wrong.

Do you feel Josslyn is justified in her rotten attitude when it comes to Sonny Corinthos, or is she just being an ignorant brat? Please take out poll and let us know. Be sure to tune into ABC’s General Hospital (GH) to catch up on everything happening in Port Charles. Check Soap Opera Spy for updates, news, rumors and spoilers!

The Bold and the Beautiful Spoilers: Quinn Wants to Fight for Her Marriage, Ridge Fears Consequences – Coco Frets Over Sally’s Stunts