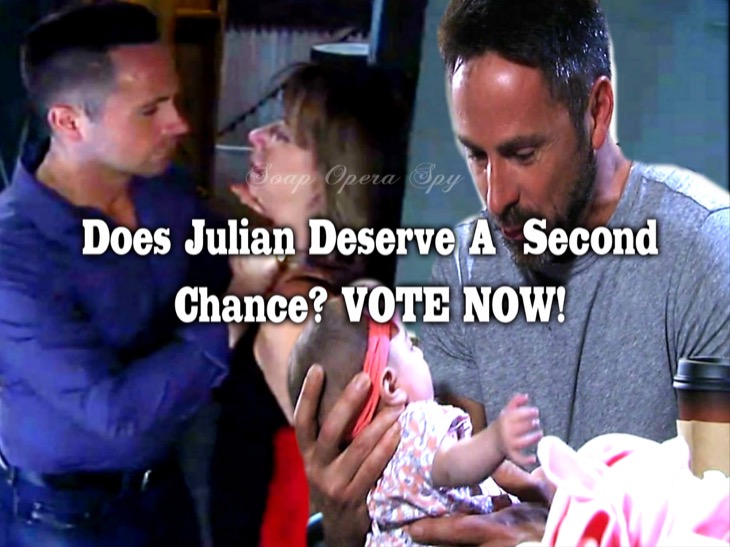 General Hospital spoilers suggest Alexis Davis (Nancy Lee Grahn) is too blinded by her feelings for ex-husband, Julian Jerome (William deVry) that she will defy her own daughter, Samantha Morgan’s (Kelly Monaco) wishes and let him see and hold his brand-new granddaughter, Scout. Do you feel Julian even deserved that moment of tranquility?

GH’s Julian Jerome has been a heartless crime lord for a long time now, meaning he has done things, in the name of “business” that are completely unforgivable; but that doesn’t make him much different than his rivals, like Sonny Corinthos (Maurice Benard). Its the more personal misdeeds he has done, that question whether he is worthy of Alexis’ love and at a second chance.

When General Hospital’s legal eagle, Alexis Davis finally gave into her heart and fell madly in love with Julian Jerome, the bad boy from her youth that got away. It seemed to be the perfect match and a huge fan base quickly rose in support of them; but then Julian did the unthinkable, he threatened to kill Alexis, holding the very dagger Helena Cassadine (Constance Towers) used to slit Alexis’ mother, Kristin Bergman’s throat decades earlier.

Not only did GH’s Julian attempt to kill the well-liked attorney, he was also responsible for the murder of long-time, beloved character, Duke Lavery (Ian Buchanan); something he was found not guilty of, but we all know that being “not guilty” does not by any means mean “innocent!”

General Hospital’s Julian Jerome claims he has a deep love for his family and would do anything to protect them but no one has forgotten how he used his grandson, Danny’s illness and possible need for more bone marrow as leverage for him to stay alive?

Recently, it was revealed that Julian had no choice in all these horrible misdeeds as he was under the orders of his sister, Olivia “Liv St. John/ Jerome (Tonja Walker), who had presumably died at his hands years earlier. Do you think this is a good enough reason for Julian to be redeemed for everything he has done to Alexis and the ones he loves?

It remains to be seen if GH’s Sam and Jason Morgan (Billy Miller) find out that Alexis allowed Julian to see and hold Scout; the one thing they strictly forbade and how they will react to it. It is clear that Julian and Alexis clearly love each other, but both have learned that sometimes love just isn’t enough. Is there a reconciliation in the works and what does that mean for Alexis and her daughters’ relationships? Please take our poll and let us know what you think.

Be sure to tune into ABC’s General Hospital (GH) to catch up on everything happening with Julian and Alexis. Check Soap Opera Spy often for updates, news, rumors and spoilers!

The Young and The Restless Star Max Page Hospitalized Again