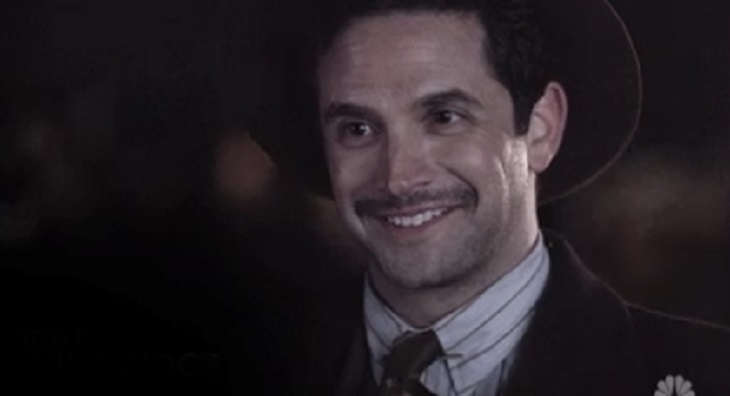 General Hospital (GH) fans will be excited to learn Brandon Barash, who portrays Johnny Zacchara, is guest starring on NBC’s Timeless as Ernest Hemingway when he was a reporter during the first World War.

For those of you who have not seen the prime time series Timeless it is a show written and produced by Eric Kripke (Supernatural) and Shawn Ryan (The Shield). It is a time-traveling drama series about a criminal who stole a time machine determined to destroy the world as we know it, by traveling to the past and altering it. A history professor helps a soldier and scientist travel through time, attempting to stop the elusive criminal.

Brandon Barash was last seen on General Hospital (GH) in January 2016, where he enlisted the help of Lulu Falconeri (Emme Rylan) to hide him at her business, The Haunted Star; but he has had a huge fan following since he arrived in Port Charles in 2007 originally believed to be the son of Mobster Anthony Zacchara (Bruce Weitz) but later discovered that the woman he believed to be his sister, Claudia Zacchara (Sarah Joy Brown) was actually his mother.

When Brandon is away from his acting career, he plays in a band Port Chuck. The band consists of former soap opera stars, Scott Reeves (DOOL, Y&R), Steve Burton (Y&R, GH) and Bradford Anderson (GH).

Be sure to tune into NBC’s Timeless on Monday nights at 10pm ET to catch Brandon Barash’s performance and check Soap Opera Spy often for updates, news, rumors and spoilers!

How about that Hemingway? #Timeless pic.twitter.com/epIjc9dZkQ

‘The Young And The Restless’ Spoilers: Billy Apologizes For Elevator Kiss – Saves Phyllis From Disastrous Date, ‘Philly’ Far From Over