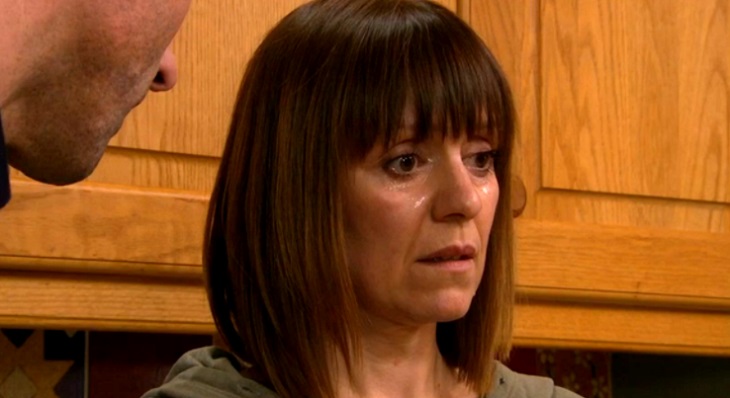 Rhona Goskirk’s (Zoe Henry) marital rape storyline on Emmerdale has had viewers transfixed to their screens. For months they’ve seen the tortuous path she’s taken to get justice for the way husband Pierce (Jonathan Wrather) attacked her. Now Rhona’s alter ego is speaking out to set the record straight on what she thinks about the controversial plot.

During an interview on This Morning, the 43-year actress made it clear that she understands the ways in which Rhona has chosen to handle the horrible situation she found herself in. Henry explained that Rhona was in an emotionally vulnerable position seeing as how she had previously experienced her husband cheating on her.

Although Rhona is a woman in touch with her own strength, Henry continued, the affair took a toll on her and affected the way she interacted with Pierce. “She ignored a lot of the signs because of pride, the talented star noted. “On paper, he’s bad but she never dreamed it would get to that point.” She went on to say that after the rape, “everything came into focus. All the things in the past became clear to her. Everyone warned her.”

Of course by then it was too late to prevent the damage done. But since her ordeal came into focus, Rhona has found the courage to step up and do the right thing. She confronted Pierce and then gave testimony against him. This week the trial against Pierce began, and Rhona was front and center to face the evil doer.

Unfortunately, Pierce’s lawyer plays hardball and questions Rhona in such a way that she finds it hard to keep her composure. According to Henry, Rhona feels defeated by her performance. Will she have the resolve to see this trauma through to the end?

The talented brunette dished that Rhona actually felt sorry for her wretched husband. Henry said, “She still believes there’s a good man in there who might say sorry.”

Check back with Soap Opera Spy for more Emmerdale spoilers and news.

WATCH: The Young and The Restless Preview Video Wednesday August 2

WATCH: The Bold and The Beautiful Preview Video Wednesday August 2