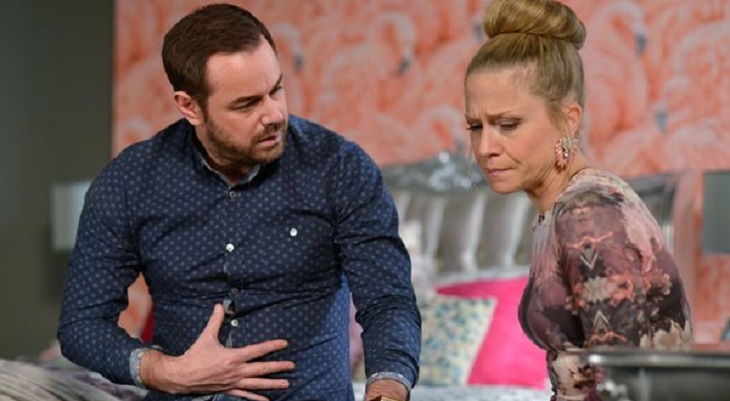 EastEnders spoilers hint that in Linda’s (Kellie Bright) absence Mick (Danny Dyer) has been a bit of a bad boy, his flirtation with Whitney (Shona McGarty) has not calmed down since her return. He even invited Whitney to live in the flat above the Vic again and gave her the barmaid job she left just weeks ago. Did he do this just to get close to her again?

EastEnders spoilers tease that Linda is going to return to this odd living arrangement and immediately sense that something has in fact changed between the two.

According to EastEnders spoilers, Mick Carter may cave and confess to Linda that he cheated with his son’s wife.  Obviously, that won’t go over well.

Linda is no fool and will cause a fight with the two after she suspects the two of them have been at it behind her back. She has been away for months taking care of her own mother who suffered from a terrible stroke.

In reality Kellie Bright needed time off to take care of her new baby son, but a now healthy infant she is returning in full swing.

But Linda is not the only one returning, as well as Whitney, Woody (Lee Ryan) is also making a splash when it will be revealed that he is engaged to Whitney.

Will the couples that are together at the beginning of the week still be happily in love by the end? With jealously being this week’s theme, it will be a dramatic and tense week at the Vic.

It is also rumoured that it will not only be Mick and Whitney who are hiding the secrets, as Linda herself is returning with guilt all over her face. What exactly is she hiding? And will it affect her marriage with Mick. Perhaps she is so quick to pounce on her husband as she is feeling similar emotions of marital betrayal?