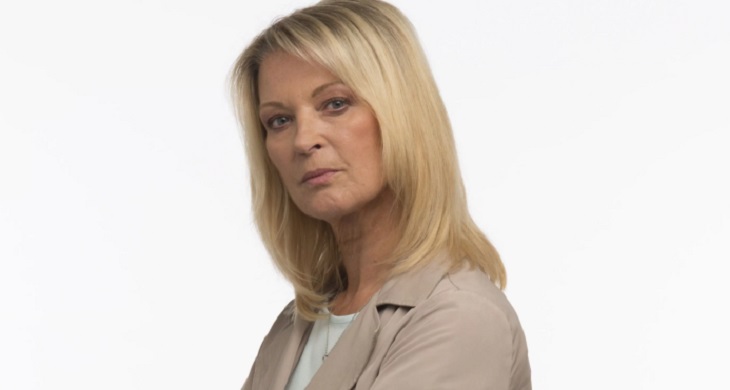 EastEnders spoilers tease that there could be another massive exit off the show at Christmas time. Kathy Beale (Gillian Taylforth) is set to leave the square over the evil James Willmott-Brown (William Boyde). Photos of Kathy carrying a suitcase and walking away from her home have been released.

Does this mean she will go for good? She has recently confronted her rapist, who was sent to prison in 1988 because of the crime he committed against her.

EastEnders fans saw an emotional scene between the two, where she described how he held her down and raped her. Kathy spoke about how she wished she had done more to stop him, and the feeling of helplessness.

His return to the square has had a terrible effect on her, she is frightened of him showing up and terrorizing her. James for some unknown reason thinks its Kathy’s fault, and wants revenge on her. This hard-hitting story line has had an emotional impact with fans of the show.

This is not the only reason Kathy is leaving. She has recently lost her nephew Stephen Beale (Aaron Sidwell) and her Ian Beale (Adam Woodyatt) is having a terrible time over the breakup of his family. It’s not hard to see why she wants to leave the square.

She is set to make the decision to leave next week, when Ben Mitchell (Harry Reid) finds out about her rape and his new boyfriend’s family being behind it. It will be the last straw and she will no longer be able to handle life in Walford. With hardly any support or family who are on her side.

Ian will try to convince Kathy to stay but will it be enough? With the threat of a rapist on her doorstep and too many recent deaths. Do you want Kathy to stay on the square and face her demons?

The Bold and the Beautiful (B&B) Spoilers: Steffy Feels Guilty, But Can She Really Stay Away from Bill?