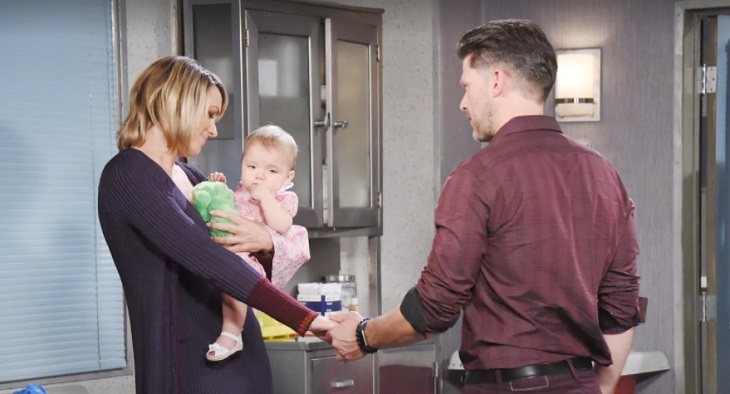 “Days of Our Lives” spoilers for Tuesday, September 12 reveal that Nicole Walker (Arianne Zucker) will make a sacrifice. Also, there will be two separate confrontations while business partners engage in battle.

Nicole’s exit is coming soon, but in the meantime, she is involved in a love triangle with Eric Brady (Greg Vaughan) and Brady Black (Eric Martsolf.) She is also dealing with murdering Deimos Kiriakis (Vincent Irizarry.) She does have a bit of sunshine though. Nicole finally has baby Holly. “Days of Our Lives” spoilers tease that she will make a sacrifice. Does this have to do with love or something else?

Rafe Hernandez (Galen Gering) wants to get married soon. However, Hope Brady (Kristian Alfonso) seems hesitant. She won’t even agree to set a wedding date. Rafe wonders what the problem is. He will end up asking the detective why she is stalling on walking down the aisle. Does this have to do with Bo Brady (Peter Reckell,) is it normal pre-wedding jitters or is there another explanation? Can these two get on the same page or is their relationship doomed?

“Days of Our Lives” spoilers reveal that Andre DiMera (Thaao Penghlis) will get out of the mental hospital. He shows up and Chad DiMera (Billy Flynn) confronts him about his actions. He feels betrayed, not just for himself, but for Kate Roberts (Lauren Koslow.) In his mind, he wonders if he can ever trust his brother with anything again.

There will also be a battle between Chad, Andre and Kate. It is over DiMera Enterprises. Chad should be the one in charge. However, due to the Greek island situation, Kate took over. Chad has to bide his time before he can regain control of the company. Even though Kate has good intentions, Andre feels she is trying to push him out. This doesn’t make him happy since he is a true DiMera and she just married him so she could be in control. Everything will come to a head between the three characters. How will they resolve this conflict and save the company’s reputation?

Keep watching the NBC soap and check back for the latest “Days of Our Lives” spoilers, updates and news.

The Bold and the Beautiful Spoilers Tuesday, September 12: Justin Apologizes – Steffy Tries to Mend Fences – Liam Gets A Warning