‘Days of Our Lives’ Spoilers: Sonny’s Escape Attempt Fails, Paul and JJ Save the Day – Abigail Gets a Shock – Shane and Drew Work Together 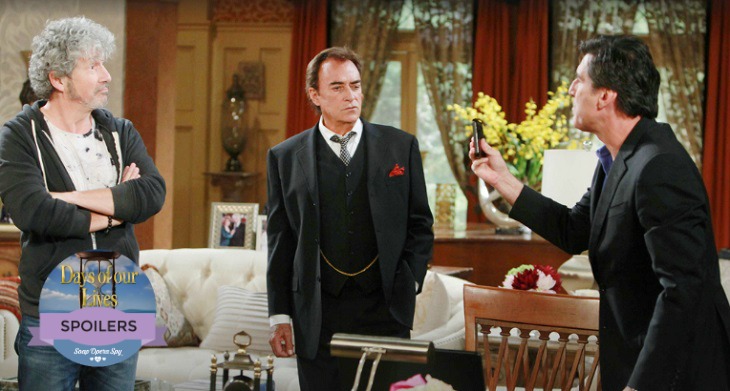 “Days of Our Lives” spoilers for Tuesday, February 21, tease that Shane (Charles Shaughnessy) will be surprised to see his twin brother. Drew (Charles Shaughnessy) will explain the difficult situation he’s dealing with. He’s been trying to wipe out the Orwell device with a virus, but his efforts haven’t paid off yet. It looks like Drew needs some help from Shane to make it happen.

Shane will work with Drew on this complex project. They’ll find a way to destroy the Orwell device and hopefully wrap up the technology war. Meanwhile, Andre (Thaao Penghlis) and Eduardo (A Martinez) will meet up with Deimos (Vincent Irizarry). After some clashing, they’ll all agree that it’s time to return their hostages.

They’ll believe that the end is near in Tuesday’s episode. Just as their last glimmer of hope dims, Abigail (Marci Miller) will arrive to get them out of that freezer.

Abby will see that they’re unconscious and in their underwear. She’ll definitely wonder what’s been going on behind closed doors. Across town, Sonny (Freddie Smith) will take advantage of an opportunity to escape. Unfortunately, his attempt won’t pan out. Sonny’s captor will stop him from making a break for it.

To make matters worse, Sonny will face a brutal beating for trying to get away. The good news is Sonny’s nightmare is almost over. “Days of Our Lives” spoilers state that Paul (Christopher Sean) and JJ (Casey Moss) will carry out a rescue mission. Sonny will be relieved when they finally save the day.

Related: Days of Our Lives – The Complete Family Album

You can bet that Sonny will give Deimos an earful for his part in this mess. In fact, Sonny will go one step further by taking his complaints to Victor (John Aniston). Next week, Victor will have to decide what he’s going to do about his dangerous brother. Deimos is clearly not the best leader for Titan Industries. His impulsiveness isn’t doing the company any favors.

The Young and the Restless Spoilers: Billy Crosses A Line – Can Colin And Jill’s Marriage Survive Latest Crisis?

WATCH: ‘The Bold and The Beautiful’ Preview Video Tuesday, February 21