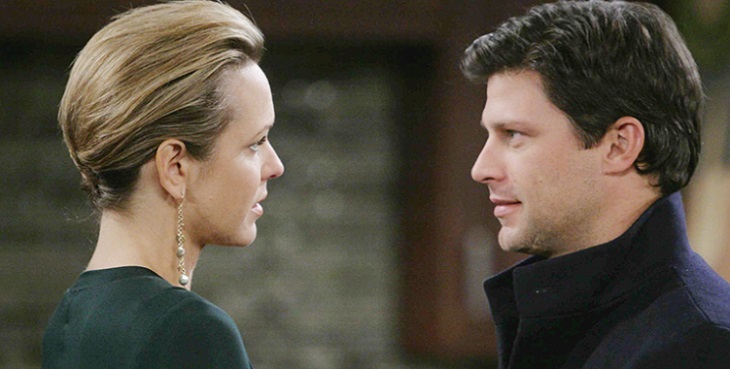 Days of Our Lives” spoilers for the week of September 25 reveal that Nicole Walker (Arianne Zucker) reaches out to Eric Brady (Greg Vaughan.) Everyone has been waiting for “Ericole” to rekindle their romance. However, it hasn’t happened yet and nobody is sure if it ever will. Recently, Vaughan spoke to Soap Opera Digest about the storyline.

The actor was asked if Eric has considered confessing his real feelings to Nicole. It turns out that he has and part of him wants to reveal the truth. However, it is complicated because Nicole is with Brady Black (Eric Martsolf.) It isn’t just another man, that is Eric’s brother.

“There’s a part of him that wants to jump out on the edge and see what would happen if he told Nicole how he felt. But that’s not the best choice for him to make because he knows how Brady feels about Nicole.”

“Day of Our Lives” spoilers revealed that Eric would write Nicole a letter before leaving Salem. That happened on Friday’s episode. Even though he didn’t confess his feelings, Eric did say he was leaving because of her.

Once again, Eric has sacrificed everything for Nicole. He couldn’t break her heart or her spirit by firing her. So, he chose to give up a job he loved and walk away from his family. All of it was for Nicole’s benefit. On one hand, it is kind of noble. However, it is also a big mistake and something he will regret.

Related: Days of Our Lives Spoilers: Sonny Walks in on ‘Intimate’ Moment – Paulson Wedding In Jeopardy

“Days of Our Lives” spoilers tease that Marlena Evans (Deidre Hall) will search for her son. Finding him at the old farmhouse, she discusses his feelings for Nicole. The psychiatrist will also try to coax him back to town. If he goes back, how will Brady react to this? He certainly won’t be happy, that’s for sure.

Some fans are concerned about how far Brady will go to keep Eric and Nicole apart. His behavior is getting more frightening. He is a desperate man trying to hold onto a woman he thinks he loves. It is clear he will go too far. However, will he be able to repair the damage after it’s all said and done?

Keep watching the NBC soap and check back often with Soap Opera Spy for the latest “Days of Our Lives” spoilers, updates and news.

The Young and the Restless Spoilers: Graham Believes He’s Ashley’s Brother – Brent Davis Father To Both?

Dancing with the Stars Spoilers: Victoria Arlen’s New Lease On Life, Will She Win Mirror Ball With Val Chmerkovskiy?