‘Day of Our Lives’ POLL: Who Do You Want Gabi With – JJ or Chad? VOTE! 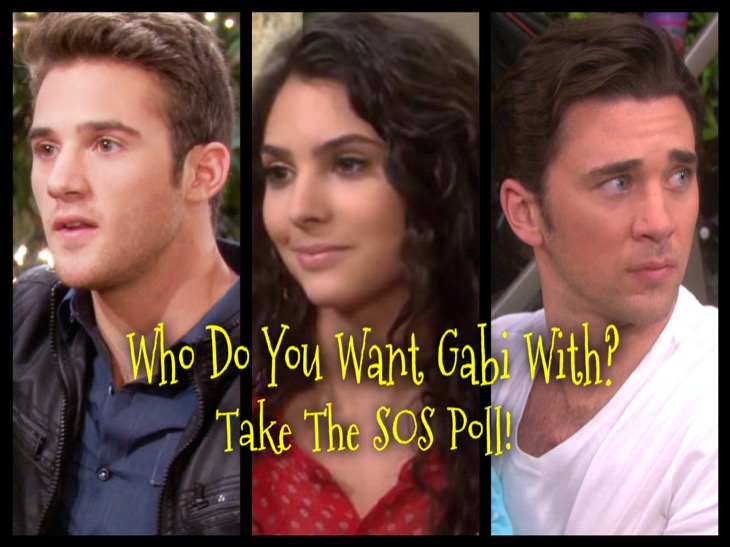 Days of Our Lives (DOOL) has always been filled with love triangles, and lately it hasn’t changed much. Gabi Hernandez (Camila Banus) has not had an easy life, between going to jail for killing her obsessed ex-boyfriend, Nick Fallon (Blake Berris) and having a baby after a one-night-stand with her gay best friend, she’s been very unlucky in love.

Jack “JJ” Deveraux Jr. seemed to be the perfect man for Gabi. He accepted Arianna Horton (Harper and Sydney Udell) as a big part of his life, even playing the role of step-dad when Sonny Kiriakis (Freddy Smith) wasn’t around.

Before DOOL’s JJ started a relationship with Gabi, he was very immature about everything in life including cheating several times on Gabi’s sister, Paige Larson (True O’Brien). Many fans voiced their criticism of JJ for sleeping with Paige, Paige’s mother Eve Donovan (Kassie DePaiva) and even her aunt Theresa Donovan (Jen Lilley).

Gabi and JJ ended up having a great relationship with him growing up right before our eyes. He is now a police detective who seems to know what he wants, but not before he cheated on Gabi with his partner, Lani Price (Sal Stowers). Could Gabi reunite with JJ and fully trust he could remain faithful only to her, or has he ruined one of the few good things in his life?

Days of Our Lives’ viewers have watched as Chad DiMera (Billy Flynn) matured, especially after he believed his wife, Abigail (Marci Miller) died. He suffered, turning to alcohol to ease his pain, but managed to pull himself together and become a very hands-on father.

Gabi and Chad started out as friends and have been able to develop a genuine relationship from that. Chad has never cheated on her nor broken her trust in any way. Little Ari adores Chad, and he treats her like his own. The bad thing is Chad is still married to her best friend, Abby; although it seems it is more out of obligation than love.

Both men come with their issues, JJ is a serial cheater. He isn’t married but is a police detective investigating her family. Chad is married and deeply involved in a war with the Kiriakis family and Gabi’s family. Clearly, they are both a risk to her, so where does her heart lie?

Please vote on this poll and let us know who you think Gabi should be with – JJ Deveraux or Chad DiMera? Be sure to tune into NBC’s Days of Our Lives (DOOL) to follow this story and more. Check Soap Opera Spy often for updates, news, rumors and spoilers.

Get Exclusive DAYS OF OUR LIVES News & Updates!

‘The Bold and The Beautiful’ Spoilers: Quinn Longs For Ridge – Struggles To Repress Her Feelings