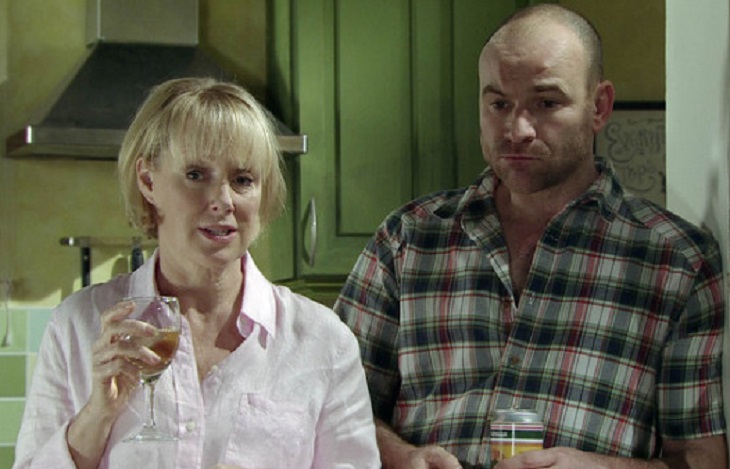 On, “Coronation Street,” Sally’s stalker is finally identified. But is the accused a plant meant to throw Sally and her husband off the scent of the real stalker? If so, Sally is in more danger from her invisible cyber bully than ever before!

Councillor Sally is being harassed by an unseen enemy and it’s unclear if the person’s vendetta is personal or professional. Last month she endured a most painful trauma when someone used her past breast cancer diagnosis to taunt her.

After a successful radio interview in which she talked about her health history, Sally returned home where her proud husband and daughter were waiting to congratulate her.

But their party was soon interrupted by a call from the hospital with bad news. Apparently Sally’s cancer had returned! Sally is told that her mammogram has come back positive and she prepares to go to the hospital for more information.

But, before the terrified woman can leave, Sophie and Rosie arrive with more sickening news. The “hospital call” was nothing more than a cruel joke, and it has been posted online. This incident is just the latest in some troll’s effort to punish Sally. Who could be so vindictive and cruel?

Fast forward to the upcoming town hall meeting, where Sally intends to speak despite her husband Tim’s fears for her safety. Sally won’t be convinced to play it safe however, so Tim accompanies her to the meeting. He’s understandably on high alert and vigilant for any danger or weirdos that may threaten his wife.

Related: Emmerdale Spoilers: Killer Emma Finally Caught, Will She Pay For Her Crimes?

After all that Sally’s been through, Tim is determined to bring this whole ugly campaign of terror to an end. So when he spies a suspicious character in the crowd, he jumps into action and grabs the phone away from a woman he thinks is the stalker! Tim destroys the phone, but is the woman a real or imagined threat? If Tim goes to jail over his violent rage, who will be there to protect Sally if the stalker strikes again?