Big Brother 19: Can Anyone Beat Paul Abrahamian In The Final 2? VOTE! 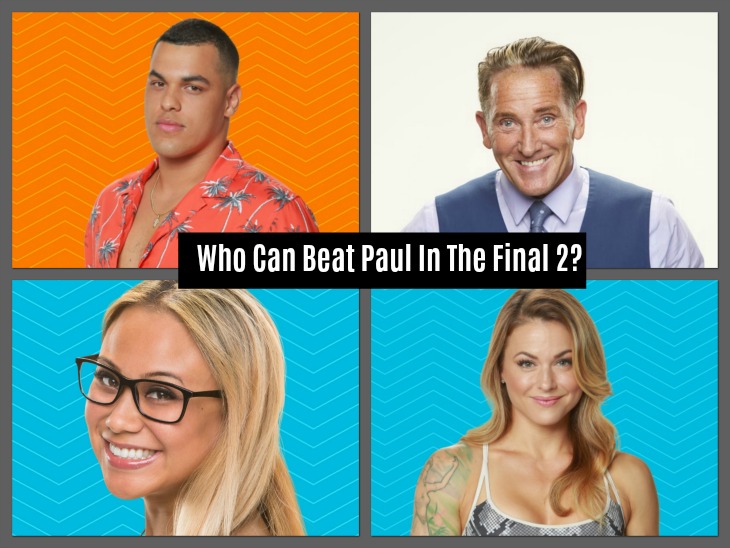 Big Brother houseguest, Paul Abrahamian has played a flawless game. He has played a game so no one can beat him. He aligned himself with people who depended on his expertise to get ahead in the BB19 game. Is there anyone in the game right now that defeat the BB18 vet?

Josh may be the biggest underdog of the season. He started off thinking he would leave during Week 1 or 2 but managed to align with Paul early in the game. He learned how to play the game and become a powerhouse in making decisions. Sure, he cries a little too much, but he is fun to watch and could win the game.

If Josh wins the final Veto competition, it could put him in a great spot to win the game. It would give him multiple HOH wins, and a few Veto wins. He has the best shot at winning the game if sitting next to Paul.

Everyone loves Kevin. He’s funny and has the best one lined zingers. What he doesn’t have is a Big Brother game. He has cruised and done exactly what Paul told him to do all season. It’s doubtful he will make it to the final two, but if he does, he will come in second.

Christmas hurt her foot early in the season. She should have been taken out of the game. However, for whatever reason, BB19 allowed her to stick around. She has a great social game but has a mean side. She seems to be only loyal to Paul, lately.

The fitness guru’s chance of winning against Paul is not good. Both of her HOH competition wins were thrown to her by Paul. If she is next to Paul in the final two, she will lose to him.

Alex is a good competitor and could win Big Brother. Paul wants to get rid of her now because, if he doesn’t, she’ll give him a run for his money and likely take him out next. Alex is not loyal to anyone, which makes her dangerous to work with. With her alliance with Jason Dent, she could easily win if she made it to the final two. Of course, Paul won’t allow that to happen, and she will be the next houseguest to leave the BB19 game.

Who do you want to win Big Brother 19? Who has the best chance to beat Paul? Stick with Soap Opera Spy for more Big Brother 19 spoilers, news, and live feed updates!

The Young and the Restless Spoilers Wed, Sept 13: Victoria Freaks At Cane – Zack Nearly Gets Caught – Jack Suspicious of Billy