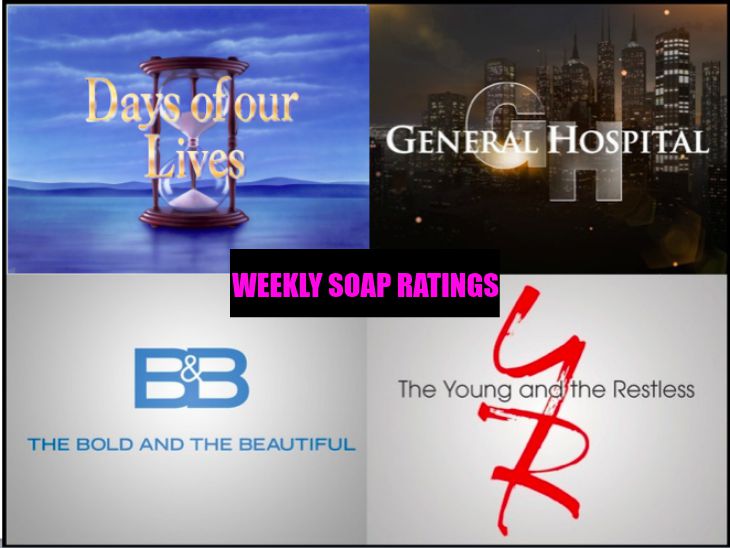 The soap opera ratings for the week of August 22-26 have been posted by Soap Opera Network. ‘Days of Our Lives’ returned to NBC on Monday, August 22. The ratings comparison is from the last full week ‘DOOL’ aired – August 1-5. ‘The Young and the Restless,’ ratings were up across the board. ‘The Bold and the Beautiful,’ had a loss of total viewers but ratings were up in the women 18-49 demographic. ‘General Hospital’ ratings were down with total viewers and women 18-49.

Soap Opera Network the ratings for ‘DOOL’ the week of August 22 through August 26 to the last full week the daytime drama aired. Total viewership was down by 32,000 total viewers with 2,149,000 watching the soap opera’s first week back after the break for the Summer Olympics in Rio. Women 18-49 were tuned in with 405,000 welcoming the soap back from its hiatus. That’s an increase of 40,000 viewers compared to August 1 through August 5.

‘B&B’ total viewer ratings were down after two straight weeks of increasing ratings with 3,718,000 watching the soap opera. That is a decrease of 14,000. After an increase in the ratings the previous week ‘The Bold and the Beautiful’ once again drew back women 18-49 with 547,000 watching the week of August 22-26. That represents a gain of 23,000 viewers in this demographic

For the second straight week ‘Y&R’ ratings are up in both total viewer and women 18-49 demographics. Soap Opera Network reports that 4,669,000 total viewers tuned in. This represents a gain of 104,000 viewers. Ratings were back up for the second straight week in the women 18-49 demographic with 628,000 turning in. That represents a gain of 27,000 viewers.