‘The Young And The Restless’ Weekly Spoilers June 13 – 17: Sage’s Ghost Rattles Sharon – Jack Walks In On Phyllis And Billy – Secrets Are Revealed 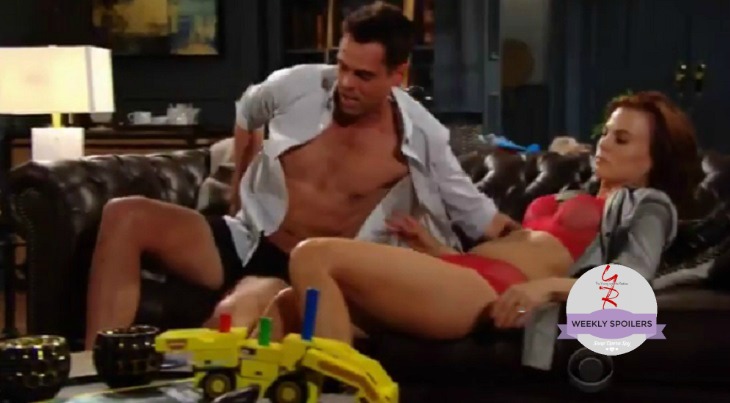 The Young and the Restless (Y&R) spoilers for the week of June 13 feature guilt, shame and fear. Sharon McAvoy (Sharon Case) will start to come unraveled as Sage Newman’s (Kelly Sullivan) ghost spooks her. She has tough questions for Sharon, and she begins a downward spiral out of control. Billy Abbott (Jason Thompson) and Phyllis Abbott (Gina Tognoni) are caught in the act, resulting in Jack Abbott (Peter Bergman) discovering the truth about their relationship.

The Y&R promo shows Sage demanding to know why Sharon has not told Nick Newman (Joshua Morrow) the truth about Sully’s identity. She tells Sharon that she promised to tell him and he is still mourning not only losing her, but Christian. Apparently, Sage issues some type of threat, and it spooks Sharon so badly, she decides to plan a way to tell both Dylan McAvoy (Steve Burton) and Nick.

Sharon tells her daughter that she needs to confess about Sully, but isn’t sure how to do it. She isn’t sure the best way to tear her family apart, but knows it has to be done. Mariah Copeland (Camryn Grimes) tells her she will feel better after admitting the truth. “Confession is good for the soul,” Mariah tells her mother. The question remains, will Sharon admit the truth, or continue to lie and accidentally hurt Nick and Dylan in the process?

The Y&R promo also reveals that Billy and Phyllis are about to face the consequences of their affair.  Jack catches them in the act (almost) and they decide it’s time to let him know what’s been done on behind his back. Billy selfishly wants Phyllis to himself, but she isn’t ready to let her marriage go just yet.

Phyllis tells Jack alone at the GCAC, “Jack, I have been sleeping with someone else, and…it’s Billy.” The Young and the Restless spoilers indicated that Jack will tell Phyllis he wants to murder Billy with his bare hands. Clearly, the sibling rivalry is not going to be buried anytime soon.

Stick with Soap Opera Spy for all you’re The Young and the Restless (Y&R) spoilers, news, and updates.

Guilt, fear and shame are front and center next week on #YR!