‘The Young and the Restless’ Spoilers Week Of Nov 21-25: Nikki Faces Off Against Sharon – Dylan Must Choose – Travis Proposes To Victoria 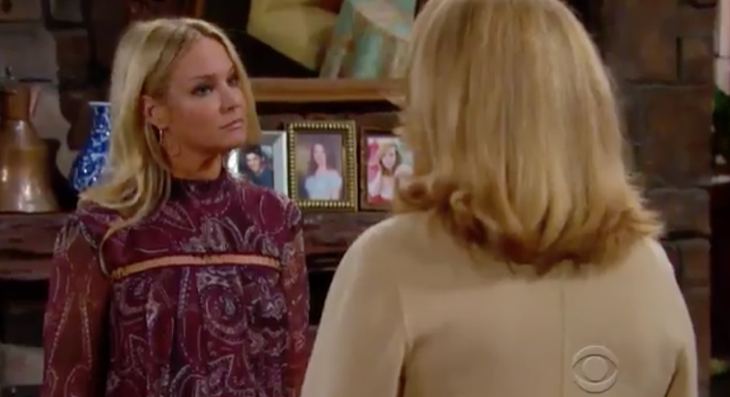 ‘The Young and the Restless’ spoilers for the week of November 21-25 reveal that the Newman clan will put aside their differences for Thanksgiving. Victor Newman [Eric Braeden] and Nikki Newman [Melody Thomas Scott] will gather around the table and enjoy the holiday.

Dylan McAvoy [Steve Burton] will be absent from the Newman Thanksgiving dinner table. Nikki will inform Sharon Newman McAvoy [Sharon Case] that she is not welcome in Nikki’s home. Dylan is struggling with his emotions, caught between his mother and his wife. Ultimately Dylan will decide to spend the day with Sharon.

Travis Crawford [Michael Roark] will accompany Victoria Newman [Amelie Heinle] to the Newman family dinner. Having exposed his unseemly past to Victoria and after proposing marriage it’s fitting that Travis would spend the holiday with his future in-laws.
Enjoy the Newman family gathering while you can Travis because eventually Victoria will find out Travis cheated on her with Michelle Hazelton [Kelly Frye].

Sharon and Dylan will be alone on Thanksgiving because Faith Newman [Alyvia Alyn Lind] has moved out of their home and in with Nick Newman {Joshua Morrow]. The somber and sorrowful atmosphere at Sharon and Dylan’s home just was too much for Faith to bear.
‘Y&R’ spoilers for November 21-25 reveal that eventually Dylan and Sharon will wind up on Chelsea Newman’s [Melissa Claire Egan] penthouse for dinner. It appears that Chelsea has been shut out of the Newman Thanksgiving celebration. Will she accept Sharon and Dylan with open arms?

Neil Winters has much to be thankful for as he spends time with his son Moses [Randall L. Smith]. Neil and Moses will head over to Lily Ashby [Christel Khalil] and Cane Ashby’s [Daniel Goddard] home to enjoy the day with Neil’s grandchildren Mattie [McKenna Roberts] and Charlie [Aiden Clark].

Related: Sharon Fights Back – Demands She Spend Time With Christian

Victoria will reveal to Billy Abbott [Jason Thompson] that Travis has proposed. Victoria doesn’t seem happy as she delivers the news. Billy’s emotions appear to be a mix of shock and sadness. ‘The Young and the Restless’ spoilers for November 21-25 show that despite all the Thanksgiving joy the residents of Genoa City won’t be able to put aside their differences for too long.

‘The Young and the Restless’ spoiler video for the week of November 21-25 promises, “It’s a Thanksgiving week with all the fixings, family gatherings, turkey disasters and shocking moments. There’s so much to be thankful for!”