‘The Young And The Restless’ Spoilers: Travis Is Victoria’s Elixir to Get Billy Out of Her Life 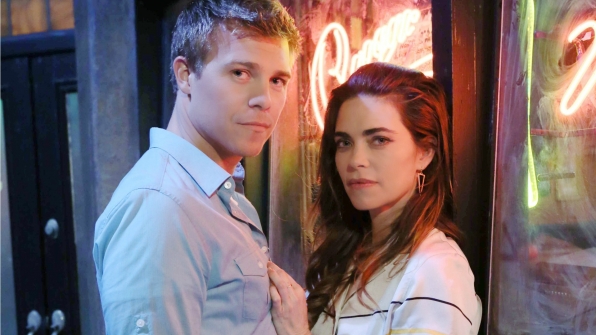 Victoria’s (Amelia Heinle) love life has been chaotic in recent years on ‘The Young and the Restless’. The main cause of her relationship dysfunction has a name, Billy (Jason Thompson). But, Travis (Michael Roark) offers Vickie a real alternative now that he’s returned to Genoa City. He’s a Billy-be-gone elixir.ori

Viewers were teased earlier this summer when the recently introduced character, Travis, sailed off to parts unknown. Roark participated in the ruse, tweeting an apparent farewell photo to the fans, cast and crew of ‘The Young and the Restless’ in mid-July. The audience wasn’t sure if Travis would be seen again. But, a month later, Roark appeared on his boat off the coast of Manzanillo, Mexico.

You Might Also Like —> Dylan Finds Passageway, Tracks Down Adam and Chelsea – Kevin Comforts a Worried Chloe

Luca (Miles Gaston Villanueva) video chatted with Travis via a Skype-like site. For plot purposes, Travis answered Luca’s call. At the time Mr. Santori was pretending to be interested in Mr. Crawford’s welfare. But, Travis knew not to trust that snake.

A few weeks later, Phyllis (Gina Tognoni) begged Vickie to fly to Travis’ boat. Vickie welcomed the opportunity to see her new flame again. While both characters on ‘The Young and the Restless’ connected romantically, Travis initially resisted returning to Genoa City so he could inform Summer (Hunter King) that Luca had framed him for the Newman Enterprises’ oil rig spills.

However, as viewers saw, Travis changed his mind. He returned and informed a gathered throng at ‘Suca’s’ pre-wedding party about Luca’s crimes. Summer resisted the information but eventually called out her fiance at their condominium.

Travis went back to Vickie’s house later that day. He told her that he’d made a mistake by letting her leave ‘Old Blue Eyes’, the boat he named in Vickie’s honor and also said that he wanted to be with her. So, ‘Tricky’ has been revived, which gives Vickie an opportunity to begin a fresh relationship with a man who appears to be more stable than Billy was, is or may ever be.