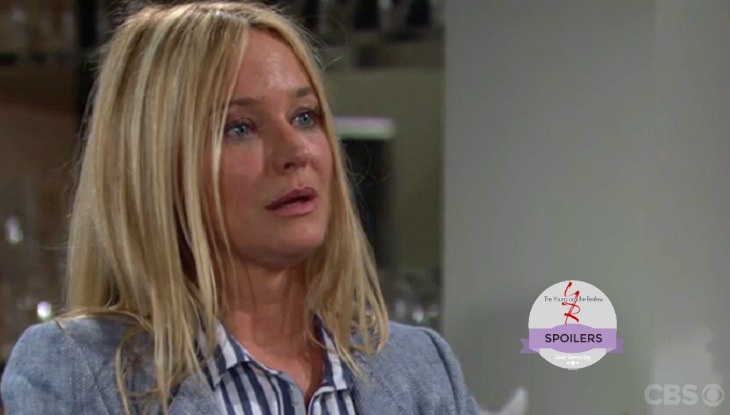 “The Young and the Restless” spoilers tease Sharon McAvoy (Sharon Case) will be faced with a huge decision about Sully’s identity. She will feel backed into a corner and feels that she has no other option but to confess that Sully is really Christian and hand him over to Nick Newman (Joshua Morrow). Of course, this is a soap opera, and it won’t go according to plan.  And, Sharon doesn’t know the WHOLE story because Christian is not Nick’s son, he belongs to Adam.

Next week, Sharon will start to unravel when she suspects that Nick thinks that Sully is his son Christian. Faith comments on his cowlick, and Nick mentions it’s a heredity trait. He reveals he had one as a child, and Sharon begins to suspect that he figured out her secret.

Sharon starts to wonder if Mariah Copeland (Camryn Grimes) told Nick anything, because how else would he know that Sully is his son, Christian. Everything Nick says, Sharon twists it to mean that he knows about Sully’s real identity.

Typical of Nick, he oblivious to the fact that Sharon seems on edge. Sharon feels that she needs to fess up to the secret, but is scared to hurt Dylan McAvoy (Steve Burton) in that way.

Sharon Case reveals to Soap Opera Digest that Sharon keeps replaying the scenarios in her head and worries that this secret will devastate not only her family but crush Paul Williams (Doug Davidson) and Faith (Alyvia Alyn Lind). Sharon isn’t thinking clearly about the situation and it won’t take long for someone to pick up on it.

Sharon keeps remembering her daughter’s words, “Sharon you got to tell Dylan. For your relationship to survive this, the news HAS to come from you.” Sharon knows Mariah was right, but she cannot find the words to tell anyone.

Case previews that at this point, Sharon is holding on to her family with all her might, and hopes that she never has to admit to anyone that Sully McAvoy is not her biological child. Will Sharon confess to either Dylan or Nick that Sully is really Christian? Don’t forget to come back to Soap Opera Spy later for more soap opera scoops, news, and casting updates.

‘The Bold And The Beautiful’ Spoilers Monday May 30: Zende Shocked by Positive Pregnancy Test, Sasha’s Scheme Still in Play – Caroline Wrestles with Guilt