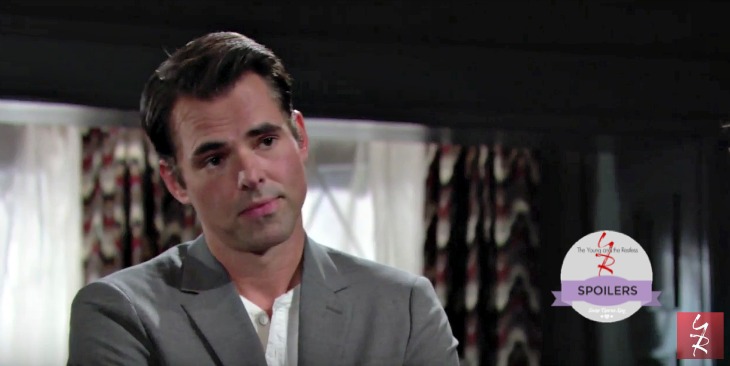 “The Young and the Restless” spoilers for Friday, April 8, tease that the battle for Passkey will begin as everyone prepares for depositions. At Billy’s (Jason Thompson) house, Kevin (Greg Rikaart) worries about Billy’s plan for them to lie during their testimony. Mariah (Camryn Grimes) isn’t sure either. Natalie (Mara McCaffray) thinks it could work, but Kevin doesn’t like the idea of lying to his brother.

At the athletic club, Michael (Christian LeBlanc) rants about the secrets Phyllis (Gina Tognoni) kept from him. She never mentioned the millions that were headed her way if Michael got Victor (Eric Braeden) convicted. Phyllis is distraught and Jack (Peter Bergman) talks about the poor choices she’s made. However, Jack insists that he’s going to straighten this whole Passkey mess out.

Nearby, Cane (Daniel Goddard) and Lily (Christel Khalil) chat with Devon (Bryton James). The news about Hilary’s (Mishael Morgan) blackmail plot has spread and Lily thinks it’s disgusting. Devon won’t give Hilary a pass, but he can’t blow his chance with her. Devon just got Hilary back and he won’t lose her again.

Back with Phyllis, Billy arrives and tells her he has a good feeling about the lawsuit. He thinks they can win. Phyllis mentions the possibility that Summer (Hunter King) and a few other witnesses could cause trouble. When Phyllis brings up how Jack left in a huff, Billy fears that he’s going to hand the project back to Newman.

Once Billy rushes out, Lily and Cane speak with Phyllis about Passkey. They think it’s great and Lily wants to use it at the club. Afterwards, Lily hints that Cane probably wishes Chancellor Industries had grabbed that opportunity. Cane says he’s content to be with Lily, but she thinks he wants to get back in the corporate game. 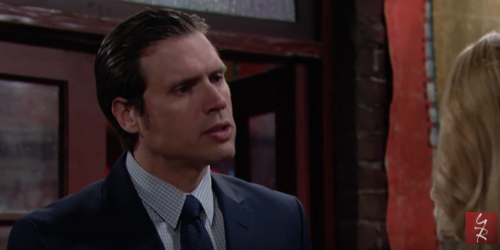 At Crimson Lights, Nick (Joshua Morrow) tells Summer that he’s working at Newman Enterprises again. Summer complains about everyone focusing on a lawsuit while Victor faces dangerous conditions in prison. Nick urges Summer to tell the truth at her deposition, but Summer is concerned about incriminating her own mother. Nick insists that Phyllis did something illegal and she shouldn’t get away with it.

Meanwhile, Kevin talks to Mariah and Natalie about giving their sworn statements. He’s afraid Michael will know he’s lying. Summer shows up and Mariah wonders if she’ll rat them out. Michael walks in and suggests there could be big trouble if they don’t tell the truth in their depositions. He speaks with Kevin privately and basically urges him to save himself. Mariah and Natalie try to get Summer on their side. They’ll be left with nothing if they lose this battle.

At the lab, Abby (Melissa Ordway) bickers with Hilary over the blackmail scheme. Hilary heads to her office and Stitch (Sean Carrigan) arrives. He brings up the idea of Dr. Neville (Michael E. Knight) being in love with Ashley (Eileen Davidson). Stitch thinks Dr. Neville is afraid Ashley doesn’t love him back.

Ashley brushes off the idea, but Abby wants to know how she feels. Ash seems uncomfortable with the discussion. Hilary calls Ashley to her office and Stitch speaks with Abby alone. Abby wants to set Ashley and Dr. Neville up by ordering flowers. In Hilary’s office, she argues with Ashley about the marketing presentation. Devon comes in and stands up for Ashley.

Hilary is upset, but Devon feels like the accident changed her. Hilary insists this isn’t a side effect. This is who she is and Devon needs to accept it. Later, Ashley is surprised when she gets a bouquet of flowers from Dr. Neville.

Other “Young and the Restless” spoilers reveal that Jack will take matters into his own hands. At Newman Enterprises, Jack walks in and finds Nick sitting at Victor’s desk. Jack cuts to the chase and suggests they should make a deal.

If Newman drops the lawsuit, then Jabot will give them a cut of the Passkey profits. Billy storms in and refuses to accept that. Jack says Nick should tell Victoria about the deal that’s on the table. Billy assures Jack that Victoria won’t take it.

Later, Phyllis tries to explain things to Billy. She feels like Jack is trying to protect them. Nick arrives and says the deal isn’t happening. He talked to Victoria and the lawsuit stands. Phyllis lashes out at Nick and Jack yells that this is on Billy. Y&R rumors hint that a major war is coming up. Stick with the CBS soap for updates on what’s in store.