‘The Young and The Restless’ News: “Y&R” Alum Michael Muhney in Accident 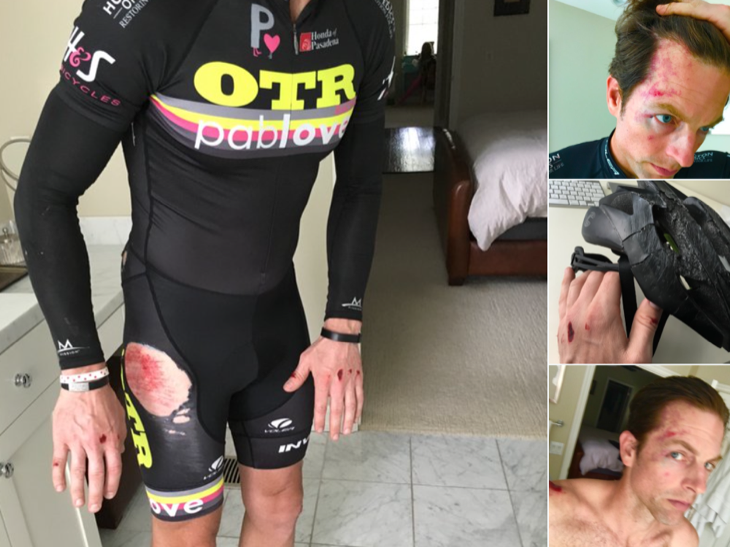 Our heartfelt recovery wishes go out to former ‘The Young and the Restless’ star Michael Muhney who met with an acccident today. (4/9/16) Muhney informed everyone of his current predicament via Twitter.  “Soooooo…this happened today in a So California bike race (I was in the top 3 with 4 miles to go):”

Muhney posted several pictures which highlighted the injuries to his body as a result of the accident. While still in his biker outfit we can see damages to his face, hands and side. He then shared several follow up tweets which led to fans reaching out to him. Fans shared how much they love him and wish a full and speedy recovery for him.

Suffered a concussion. At least now I can donate my brain to NFL research.

One of his follow up tweet in the midst of pain contained humor. He shared, “suffered a concussion. At least now I can donate my brain to NFL research.” Another follow up tweet said “Ambulance EMT guy said I somehow pull off the neckbrace look. Do you agree? #SexyNeckBrace”.

Ambulance EMT guy said I somehow pull off the neck-brace look. Do you agree? #SexyNeckBrace 😂 pic.twitter.com/HVLbAXRmPo

Muhney is best known for his portayal of Adam Newman on “Y&R” between 2009 – 2014. He is also popularly known for playing the role of Sheriff Don Lamb on Veronica Mars from 2004 – 2006. He recently killed rumors that he was somehow hired by another daytime soap opera. With his wide range of appearances on several TV shows, Muhney has a huge fan base who are wishing he feels better soon.

Muhney at this point is encouraged to take it easy and to rest. In due time he will be back to normal, we here at SOS wish you a speedy and successful recovery. So Y&R fans please take the time out to send your recovery wishes directly to Muhney, let him know he is loved. Stay tuned to SOS for updates.