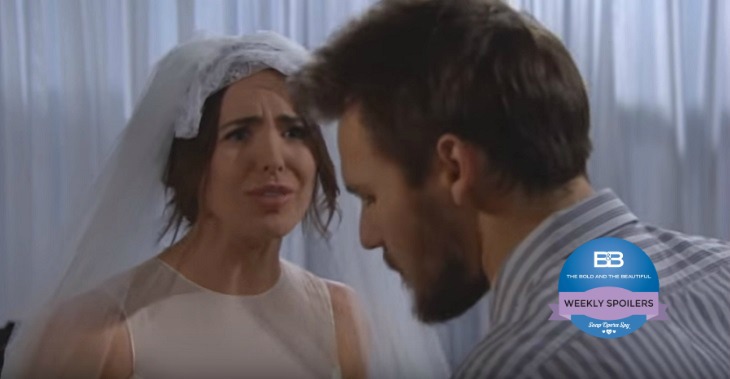 ‘The Bold and the Beautiful’ spoilers for the week of October 10-14 reveal that it’s not a good week for Steffy Forrester. An infuriated Wyatt Spencer will confront her about Ridge Forrester’s underhanded dealings. Ivy Forrester will try to reason with Liam Spencer and make him see that what he needs to move on – things are over with Steffy.

It’s time for Wyatt to stop acting as if Steffy will ever love him – she’s only manipulating Wyatt to get what she wants. ‘The Bold and the Beautiful’ spoilers for October 10-14 reveal that Wyatt knows Ridge is trying to force Quinn out. Will Wyatt allow Ridge to keep bullying Quinn or will he expose everything so Quinn can take control?

‘B&B’ spoilers for the week of October 10 through October 14 reveal that Liam [Scott Clifton] is still under Steffy’s spell, hoping for a reunion. Who would have thought that Ivy [Ashleigh Brewer] would be the voice of reason? “You’re in love with a woman who married your brother!” Ivy reminds Liam.

“I don’t think that woman is ever going to leave my life. Or my family!” Steffy declares about Quinn. Like it or not Quinn is Eric’s wife. And if Wyatt decides to stay married to Steffy she’s stuck with Quinn as a mother-in-law as well.

Is Steffy going to lose everything? Will Wyatt side with Quinn and be done with Steffy forever? Will Liam finally realize that the woman he has been pining for isn’t worth his time?

So, ‘B&B’ fans, are you as excited as we are for an all new week of drama on the CBS soap opera?  Let us know what you think in the comments below and don’t forget to check Soap Opera Spy for all of your ‘The Bold and the Beautiful‘ spoilers and news!