‘The Bold and the Beautiful’ Spoilers Tuesday March 22: Thomas Bonds with Baby Douglas, Guilt Grows for Caroline – Nicole Crushed After Chat with Zende 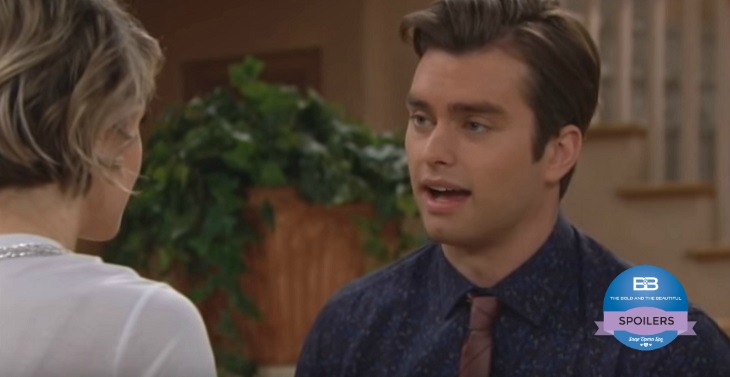 “The Bold and the Beautiful” spoilers for Tuesday, March 22, tease that Zende (Rome Flynn) and Nicole (Reign Edwards) will have a tough chat. Their relationship ended rather abruptly and Nicole is still looking for closure. Zende claimed he would stand by Nicole through this pregnancy, but he obviously couldn’t keep that promise. Now Nicole is just trying to make sense of it all.

Nicole will bring up the fact that Zende began pulling back as soon as she started showing. She’ll feel like Zende’s mind was already closed to the idea. Zende will likely admit that his view shifted as the baby grew. It was one thing to talk about the pregnancy. Actually watching it happen was a different matter entirely.

Meanwhile, Maya (Karla Mosley) will worry about her sister. She’ll wish there was some way she could help. “The Bold and the Beautiful” spoilers say Maya and Rick (Jacob Young) will discuss the problems they inadvertently caused. They’ll feel terrible since the surrogacy came between Nicole and Zende. Maya will think if Zende could just get over his aversion to Nicole’s pregnancy, they could work things out.

Unfortunately, that may not be an option anymore. Sasha (Felisha Cooper) has made her move and she doesn’t intend on letting Zende go. B&B spoilers indicate that Sasha and Nicole will have a deep conversation. It appears they’ll try to work through their trust issues, but the peace won’t last. Once Nicole finds out that Sasha had sex with Zende, it’ll be on like Donkey Kong.

Other “Bold and the Beautiful” spoilers reveal that Thomas (Pierson Fode) will ask Caroline (Linsey Godfrey) if he can hold his little brother. Caroline will reluctantly hand over Douglas and Thomas will take the infant in his arms. When Caroline sees how they’re bonding, she may have second thoughts about keeping Thomas away from his son.

Ridge (Thorsten Kaye) will remain adamant that they’re sticking to the plan. He’ll declare that this is what they set up and this is how it’s going to be. B&B rumors suggest that Ridge and Caroline’s world is about to be turned upside down. Stay tuned for updates on the intense drama to come.

So B&B fans, what do you think about the news that Nicole will question Zende about their breakup? Are you ready to see Nicole hit the roof over Zende’s new girlfriend? Will Caroline and Ridge pay a steep price for their deception? Voice your opinion in the comments below and don’t forget to check Soap Opera Spy often for the latest “Bold and the Beautiful” spoilers, rumors, updates and news.